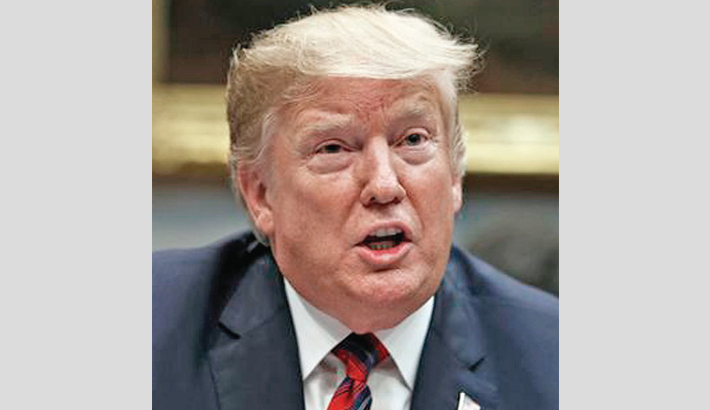 WASHINGTON: President Donald Trump on Thursday retreated from his threat to close the US-Mexican border, warning he will instead impose car import tariffs if the major US trading partner does not do more to stop undocumented migrants and drug smugglers, reports AFP.

“If Mexico doesn’t give the help, that’s OK, we’re going to tariff their cars,” Trump said at the White House. “I will do it. I don’t play games.”

Trump said he was giving Mexico one year to get the cross-border drug trade down or see him impose tariffs at 25 percent. If that does not work, closing the border would come next, he said.

It was not immediately clear if Trump’s demand for Mexico to crack down on the flow of migrants also faces a one year deadline or has to be satisfied in the near future.

Trump said that Mexico had started to detain would-be migrants this week, responding to his repeated recent threats to close the border.

Mexico is doing a “really great job” at “grabbing and taking” people, he said.

But suggesting that he wants immediate results, he added that “maybe by the end of this news conference or tomorrow that will stop, and if that stops, we are doing a big tariff.”

Regardless, the tariffs option signaled a retreat from previous suggestions that the border might be shut down, at least in parts, within days.

Trump says there is a national emergency from the influx of undocumented migrants and drugs and that drastic action is needed.

A planned visit on Friday to the California border area had raised expectations for a dramatic move. However, his border closure threat alarmed politicians across the country, including in his own Republican Party, who warned of dire economic fallout.

This was the second apparent climbdown by Trump on a big issue in a week. Earlier, he backed away from announcements that the Republicans were ready to reform America’s notoriously expensive healthcare system, when party leaders indicated they did not want to get sucked into what amounts to a political minefield.

Trump’s new border policy was first announced in a confusing statement to journalists at a White House meeting on the completely unconnected subject of US urban renewal.

Speaking without notes, full of digressions and often failing to finish sentences, Trump was not wholly clear on the details of his border policy changes.