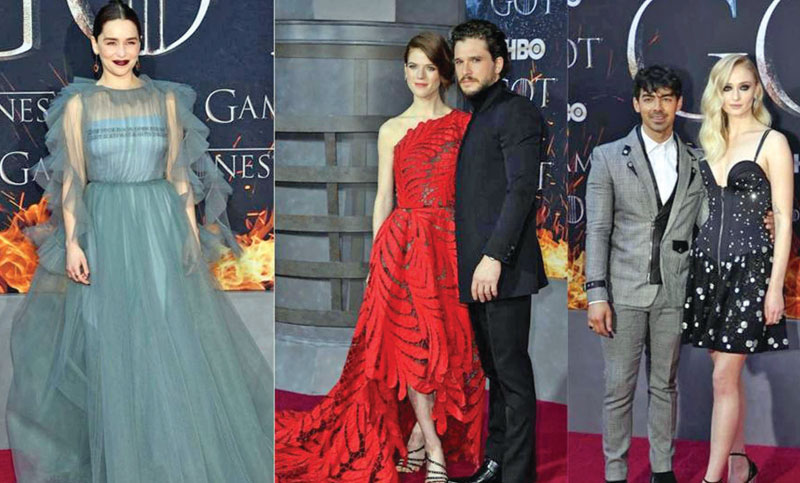 With just 10 days to go before Game of Thrones season 8, the entire cast came together for the star-studded grand premiere held in New York on Wednesday, reports Hindustan Times. Actor Kit Harington, who plays Jon Snow, walked the red carpet with wife Rose Leslie, who was a part of the show earlier.

Actor Emilia Clarke, popular for playing Daenerys Targaryen - the mother of dragons, turned up at the event in a sheer grey gown. Natalie Dormer, who played the famous character of Margaery Tyrell on the show, arrived in a gorgeous black gown. Her character was killed by Cersei in the wildfire explosion at the Sept of Baelor.

Actor Sophie Turner, popular for her portrayal of Sansa Stark, arrived with fiancé and American singer Joe Jonas. Sophie was seen bonding with her onscreen sister Arya, played by Maisie Williams, as the latter candidly posed for the cameras in a navy blue ensemble. Maisie had recently dropped a spoiler that her character will die in the second episode of the upcoming season but later called it an April Fool’s Day prank.

Carice van Houten, who plays Melisandre, and Indira Varma, who is seen as Ellaria Sand, also walked the red carpet at the Game of Thrones premiere.

John Bradley, better known as Sam Tarly and his onscreen partner Gilly, played by Hannah Murray, along with Kristian Nairn, who won the hearts of the audience as Hodor, were also spotted at the do.

Game of Thrones will air on HBO on April 14. It is the eighth and the last season of the popular show based on George RR Martin’s novel, A Song of Ice and Fire.