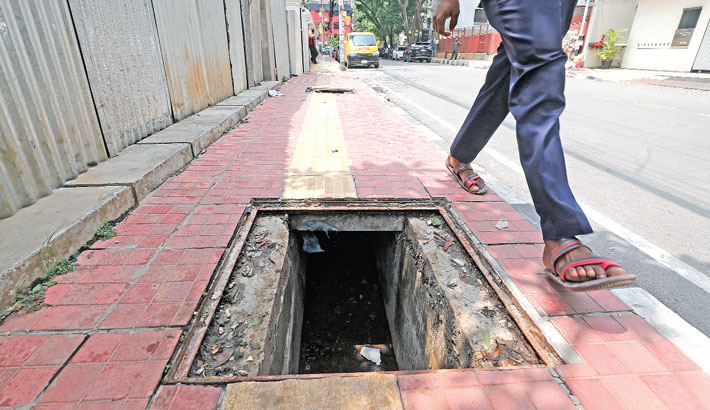 The uncovered drain on a footpath at Gulshan-1 in the capital poses serious risk to pedestrians but the authorities are indifferent to it. The photo was taken on Wednesday. – Kamrul Islam Ratan

Many manhole covers pose risk of accidents in the capital as they are fixed above or below the surface of roads.

According to bikers and drivers, some of the faulty manhole covers even pose a death risk to them.

Besides, broken manhole lids on the city footpaths or in the middle of roads cause accidents, killing or injuring people.

City dwellers said manhole covers are not fixed properly even on VIP roads.

They said sometimes manhole lids go up or down just after roadworks done by the utility services providers.

While visiting some city roads running from Shabagh to Jahangir Gate, Mouchak to Kuril, Panthapath to Rasel Square, Azimpur to Technical as well as Sat Masjid Road, Dhanmondi 27, and Mirpur 1, this correspondent found innumerable manhole covers fixed above or below the road surface.

“Many manhole lids were found below the surface of the road that runs from Karwan Bazar to FDC intersection.

“Because of faulty manhole lids, many people are injured,” said a tea vendor.

Saiful Islam, a businessman living in Badda area, said that he had broken his hand sustaining severe injuries while returning home by his motor bike.

“As soon as I was crossed Rampura Bazar area, I lost control over my motorbike when its front wheel touched the manhole lid that was fixed below the road level,” he recalled.

“I might have been killed if any plying vehicle ran over me,” he lamented.

He said, “The authorities concerned must look into the matter.”

Like Saiful, many others faced similar situation, but there seems to be none to mitigate the sufferings of people.

Hira, a pedestrian, fell down a manhole hole in Gulshan 1 Avenue on Tuesday. On his way to Gulshan-2, he was caught in the rain and tried to take shelter beside the road. But, unfortunately he fell down an uncovered manhole sustaining leg injuries.

He revealed that during road maintenance work, departments concerned are usually informed about it so that they can update their service lines, including T&T, sewerage and electricity.

“We also try to fix manholes properly soon after the road development work,” he added.

However, after an investigation it was found that WASA and city corporation officials lack information about total number of manholes in the capital.