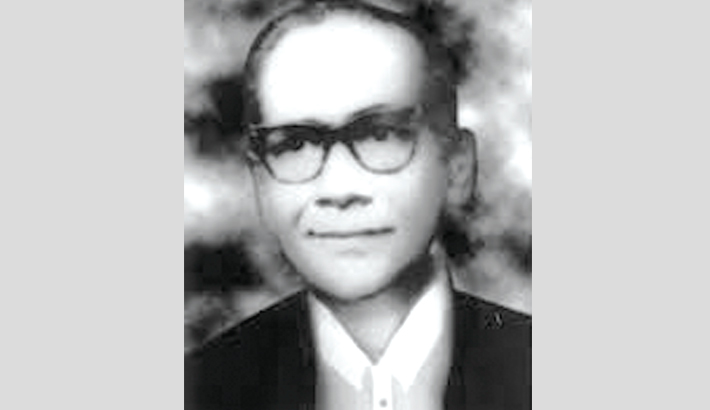 The poet Alfred Tennyson composed his famous "In Memoriam" after the demise of his intimate friend Arthur Hallam. Syed Mahbub Murshed's achievements warrant a comparable "In Memoriam", but we are without the illustrious talent of Tennyson. S M Murshed is a prominent figure and a name across all sections of our nation. His aristocratic background was a fitting precursor to a brilliant academic career. Murshed rose to pre-eminence as a jurist imbued with a deep sense of social justice. His contribution to the field of literature and belles-lettres was no less outstanding.

All in all, he lavishly bestowed upon us his vast store of wisdom on various issues ranging from jurisprudence to politics to innumerable social causes. As a jurist he was a pre-eminent exponent of the rule of law. Like many great legal minds he drew his inspiration from a variety of historical, philosophical and theological sources. Yet he was able to interpret these sources in his own inimitable fashion. His genius lay in the ability to fashion these diverse influences into his own brilliant individualism. He was acutely aware of the fact that excessive insistence on the letter of the law often violates the spirit, and turns the law into an ass. In recounting his legal skills one is reminded of the artfulness of Portia's intervention in Shakespeare's ‘Merchant of Venice’. The letter of law, and the contract between Antonio and Shylock clearly required Shylock payment of the eponymous pound of flesh, but he was prevented from exacting this by Portia's artful insistence that not a drop of blood be shed in the process!

The application of the rule of law is ultimately down to the deft, and even witty, handling of the law by legal practitioners. Murshed demonstrated his talent in this connection by reforming innumerable laws, unraveling their complexities; offering us something truly unique in the process. He can be compared to great jurists such as Marshall, Oliver Wendell Holmes and Lord Denning.

He was forever kind and generous with his affectionate advice for his juniors, without ignoring those senior to him. His relations in this area were governed by mutual self-respect and tolerance. Murshed's reputation as a great judge came through some famous cases like the Mahmud and Samabarton Mamlas, all of which are landmarks in the legal history of Pakistan. His forte lay in constitutional law as evidenced by the Minister's and 'Pan' cases.

His fame was not just confined to the shores of his country, but he had an international reputation in this regard. Like all great judges his judgments were not only impartial but tinged with humanity and compassion. Indeed, few took exception to his judgments. But the hallmark of a truly great man is the ability to rise above the narrow confines of his profession. Murshed never allowed himself to be shackled by any particular ideology or dogma, but took a keen interest in the political developments of his time. He was distressed by the episodic communal violence that punctuated the politics of the 1940’s.

Following the transfer of power and the partition of India in 1947, he joined those who were determined to bring to an end the frenzy of communal violence that swept through the Indian subcontinent. Murshed also was an active participant of the Language Movement In early 1954. He helped draft the famous 21 point manifesto of the United Front led by his uncle Sher-e- Bangla A K Fazlul Huq along with the late Abul Mamsoor Ahmed. Similarly, further to his monumental work another significant contribution by then Chief Justice Murshed was that he gave final touch to the drafting of the historic six points in 1966 for provincial autonomy which was the demand of Bengali intelligentsia. This was what Sheikh Mujib fought and was jailed for.

In early 1954 while he was still a practising lawyer among those along with Abul Mansoor Ahmed who drafted the 21 point manifesto of the Juktha-front government and this was summarised by Justice Murshed as the famous six points. This was done by private consultation with nationalist lawyers some of who subsequently became Judges such as KM Subhan, Muhammed Hossain, Shokat Ali Khan and earlier cronies like Abul Mansoor Ahmed. Later in 1966, Mazhural Haq Baki, the then President of the Chhatra League and also Serajul Alam Khan another student leader record that no one except Chief Justice Murshed who dared to accept being the chief guest at their annual conference. This is where Murshed also like Sk Mujib made the clarion call for provincial autonomy.

It was also Murshed's courageous protest resignation in the late sixties as chief justice that made the intelligentsia find him in the whole country as the only acceptable presidential candidate against Ayub. He played a prominent part in the mass upsurge of 1969 against President Ayub Khan, and in the round table conference convened by Ayub in its wake. He gave his support to the 11 point demands of the students of what was then East Pakistan. What perhaps is most significant was that during the round-table conference while Ayub was virtually on his knees and in addition, with the dissolution of the one unit in West Pakistan Justice Murshed demanded one man one vote. With the breaking of one unit Murshed argued in his speech said that it was vote of the eastern wing that created Pakistan and we are the majority by population Prior to this, in the then Pakistan National Assembly, there was parity of 150 seats each for East and West Pakistan. However, as Murshed's one man one vote proposal was accepted and because of this 169 seats out of 300 came to East Pakistan for the next national election. Therefore, in reality it was clearly Justice Murshed who paved the way as to whoever would be the majority in East Pakistan could form the National Government.

During Bangladesh's War of Liberation he refused to collaborate with the Pakistan army despite the inevitable pressures. His commitment to democracy, and his interpretation of the same was akin to Abraham Lincoln. He dedicated his energy to the freedom and well-being of men. He protested vehemently against any form of corruption, venality and exploitation. When the education department of our country was becoming corrupt, Murshed stressed that the role of teachers is to instil values, indicating that they should be at the forefront in protesting against any undesirable situation. We should be cognisant of the range and depth of his knowledge which included writings on diverse subjects in top flight journals and magazines. His association with the Anjuman-e-Mufidul Islam showed his concern for the poor. He was President of Rotary and Lions clubs, and was deeply involved with many cultural and social causes. As a powerful voice of humanity, to him 'man was the measure of all things'. Inevitably, men like Murshed have to confront many obstacles. Socrates was forced to drink the cup of hemlock; Murshed too was subjected to many pressures by the government for his honesty, integrity and above all his independence. But unlike the proverbial Faust he did not sell his soul, remaining uniquely courageous in maintaining his freedom. As a man Murshed was loving to his family and affectionate to his friends. His compassionate vision of Islam still inspires us. Not only was he a truly international figure, but Murshed will continually inspire our nationalistic principals as someone whose values and principles, as well as his steadfastness in this regard, often without recompense, are worth emulating in an age of time serving convenience.

The writer is an Advocate and a researcher on Justice Murshed