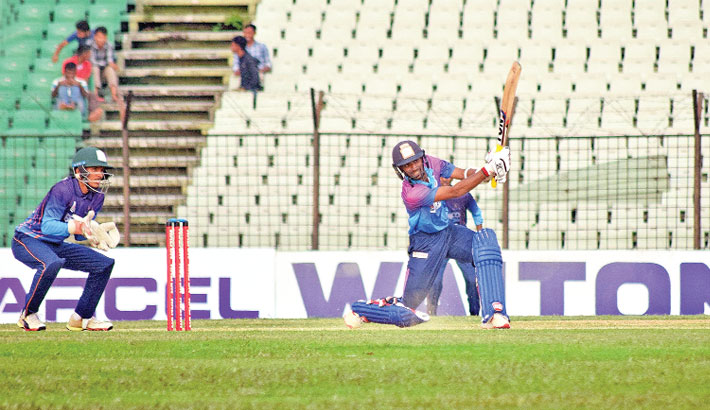 Though, Shamsur Rahman has been the most successful batsman for Gazi Group with his 51 runs off 55 balls hitting five fours.

Uttara Sporting Club managed to score 138 in 31 overs losing all their wickets during their chase after the target was reduced to 188 in 33 overs for the interruption of rain. Sanjit Saha was the most successful bowler for Gazi Group as he picked up 4 wickets allowing 20 runs in his 7 overs.

Irfan Sukkur and Avishek Mitra’s 174-run first wicket partnership saw Mohamedan Sporting Club posting 319 runs on the board, the highest total of the day in DPL, losing 9 wickets in 50 overs against Brother Union in Savar.

Mohammedan wicket keeper, Irfan was the highest run getter for his side who scored 92 runs with 10 boundaries and with an over boundary playing 105 balls.

Avishek made a good contribution in their partnership with his 68 runs from 79 balls. Avishek hit 5 fours and one six during his innings.

After rain interrupted play, Mohammedan was declared winner as Brothers Union refused to play their innings.

After Prime Bank’s innings was delayed due to rain, the target was set 149 runs in 20 overs for them but Prime Bank managed to score only 100 runs losing 9 wickets in 20 overs.

Abhimanyu Easwaran was the most successful batsman for Prime Bank with his 39 runs off 35 balls.