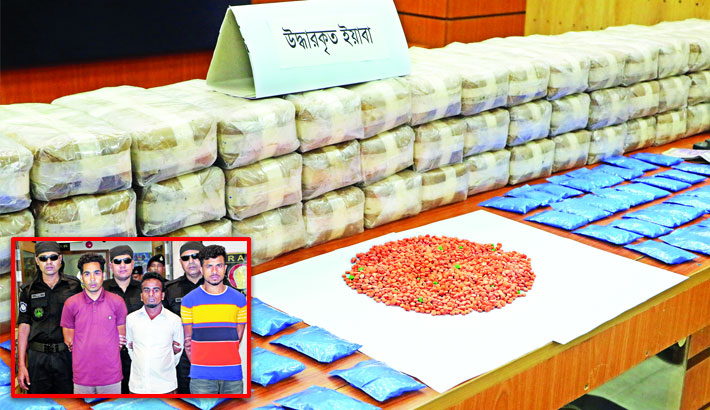 A total of 8,00,000 pieces of Yaba tablets worth about Tk 50cr put on display after recovering those from the capital and Gazipur on Tuesday. Inset, RAB arrest three ‘drug traders’ in this connection. - — SUN photo

The arrested persons are identified as Tuhin Hossain, 25, Mohammad Sabuj, 26, and Mohammad Shajahan, 35. They all hail from Boliatali village under Muladi upazila in Barishal district.

They were arrested from Sadarghat launch terminal and Abdullahpur bus stand in Dhaka and Gazipur respectively, said RAB headquarters.

Acting on a tip-off that some members of an international drug smuggling racket would come to the capital from Myanmar through river route via Patuakhali at midnight, a team of RAB-1 took position at Sadarghat launch terminal in the capital.

The RAB team caught Tuhin and Sabuj with 5.05 lakh Yaba pills from a launch named ‘Saptabarna-1’ around 5:50am.

Later, as per the information given by Tuhin and Sabuj, the elite force arrested Shajahan with 3.4 lakh Yaba tablets from Abdullahpur bus stand at Tongi in Gazipur around 1:00pm. During primary interrogation, they said they used to bring the drug from Myanmar to Patuakhali by trawlers.

They took the narcotic item to various parts of the country through road and waterways. They frequently changed routes.

Their gang comprises eight to 10 members. They have been committing the crime for the last one and a half years.

They brought the drug after every six to seven months. Each time, they brought five to seven lakh Yaba tablets.

They also said drug traders are using Patuakhali and Chandpur river routes to bring the narcotics to the capital from Cox’s Bazar.

A section of trawler owners in Cox’s Bazar are also involved in drug smuggling.