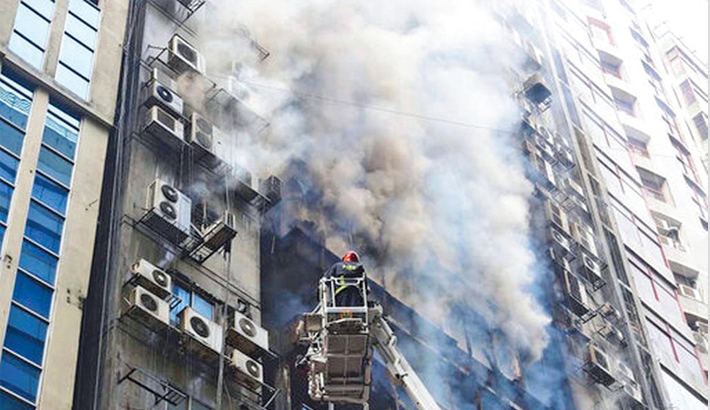 “Skies are crying, I am watching,

Catching teardrops in my hands

Only silence, as it's ending,

There's nothing left of me?”

Dhaka’s Banani, where the fire broke out, is a busy commercial hub with multi-storey buildings housing offices, universities and restaurants. According to reports, the fire broke out around 1:00pm on 28 March. Since then, the building was surrounded by onlookers and volunteer helpers.

Hagel’s grand words, “The one thing one learns from history is that                                                  nobody ever learns anything from history” have again come back to us on that day. We can create situations for bringing about catastrophes; but not delights. The dreadful inferno that hit the 22-storeyed high-rise FR Tower at Banani Commercial Area is not fortuitous. It is due to the covetousness and extreme gluttony of some highwaymen of the netherworld. The death toll from this horrific blaze rose to 26, including some who leapt to their deaths. Their deaths have made us accused.

Flames tore through the building trapping hundreds of office workers. Some of those stuck inside made it to safety by sliding down cables on the side of the building, but as shocked onlookers watched, others took their chances and jumped in a bid to escape the smoke and heat. A Sri Lankan citizen identified as Niras Chandra also was declared dead at Kurmitola General Hospital. Officer-in-Charge (OC) of Cantonment police station Kazi Shahan Haque confirmed the matter saying the victim fell off the building while trying to escape the fire. More than 70 people were hospitalised in the wake of the inferno.

Hundreds of onlookers gathered to watch as trapped workers screamed for help. Firefighters backed by military tackled the blaze. Some in helicopters lowered ropes to help people escape, while rescuers on long ladders smashed through windows.

Fire disasters regularly hit major cities of Bangladesh where safety standards are notoriously lax. The government authorities have ordered a probe into the incident to examine claims that the high-rise lacked fire equipment, its fire exits were inadequate and it had been illegally extended. Experts have said inspections of buildings in the city frequently found fire stairs blocked with stored goods and exit doors locked.

The FR Tower building reportedly consists of offices and a restaurant. Videos shared on social media shows people attempting to escape the flames by edging down a precarious rope on the outside of the building. Authorities said that six people died as a result of falling. Several people trapped inside the building posted pictures on social media showing people covering their faces to escape the smoke-filled interiors.

Helicopters joined 22 firefighting units that worked with the army, navy, air force and police to battle the blaze as smoke billowed into the sky to douse the terrible fire. The blaze comes a month after a massive inferno killed 71 people at Chawkbazar of old town. Critics at the time blamed poor regulations in one of the world's most densely packed cities.

Fire service officials said a warehouse of deodorant and granular plastic in a floor at FR Tower caught fire that fuelled the inferno which took more than 12 hours to control. Firefighters on long ladders had to smash windows to make escape routes. People were seen on the 13th and 14th floors desperately waving for help amid clouds of black smoke even after an hour of blazing eruption.

A top fire official said the flames were stopped from spreading to adjoining buildings. "Teams have entered the building and they are scouring the floors for any remaining victims. The building did not have firefighting equipment," Lieutenant Colonel Zulfikar Rahman of the Dhaka fire service told reporters.

Rescuers were soon discovering bodies and carrying them out one after another. Some workers spoke of risky escapes. A man named Jico who was working on the 19th floor said, "The fire started in a restaurant on the sixth floor. We ran to the roof as soon as we heard about it and used a wooden plank to go over to the next building."

Witness Sajib Hasan said he heard people shouting for help from the windows of the upper floors. Heavy smoke deterred efforts by responders to get close to them, but Hasan said he watched at least a dozen people get rescued. Firefighters were shattering the glass walls to release the toxic fumes.

A Facebook Live video taken by Pinaki Roy showed five people scaling down windows as burning materials fell around them. One person slipped from what appeared to be a rope that people were using to escape, bounced off utility wires and fell to the ground. A 35-year-old man, identified as Abdullah Al Faruk, an MBA student at Dhaka University, was declared dead after being rushed to the Dhaka Medical College Hospital (DMCH). Many more were admitted to the burn unit at DMCH and other hospitals currently undergoing treatment.

The authorities concerned confirmed that the Air Force, Bangladesh Navy, police and the Fire Service Department have worked together to rescue the people. A helicopter carried water to drop on the burning office building as Bangladesh’s firefighters on ladders worked to extinguish the blaze frantically on that day.

According to a study in 2012 by BUET, most high-rise buildings in the capital have inadequate fire safety measures. “We found only two buildings fully compliant,” BUET professor Mehedi Ahmed Ansari said about the survey on 112 buildings, adding that some were little more than death traps.

Fire safety measures in the building were negligible. There were no sprinklers. Fire exits existed only in name. Fire department director Shakil Newaj said they had warned the FR Tower management to improve fire safety standards, but they did not pay heed.

Witnessing flames ravaging the building, people dying helplessly and the injured groaning in hospitals is not endurable. As the embers smoulder, the reality of what happened is being laid bare. This video captures some of the extent of the damage and it is harrowing. The building is not a reinforced fire-resistant concrete hull construction. There is a solitary constricted stairwell, which runs the full height of the building.

After FR Tower was ravaged by fire, a long and detailed investigation will establish its causes, one obvious conclusion can be drawn without having to wait for such investigation that it is a man-made cataclysm.

So, the only limit to height is our capacity to maintain the safety of people in all aspects associated with the design, build and occupancy of tall buildings. Fire Service Department has to be revamped with modern equipment. Fire protection systems in the buildings have to be installed. The present building laws must be amended, if need be, and ensure rigorous enforcement.

Dubai is introducing futuristic firefighting, with flying forces, specially trained and equipped with jetpacks. Designed by New Zealand manufacturer Martin Aircraft Company, the jetpacks not only shoot rescue missions straight to the relevant balcony from outside, but will also manoeuvre heavy equipment and assess heat sources using thermal imaging cameras.

The lust of some errant people must not take away innocent lives…. 21 people died in road crashes on the same day as per newspaper reports. We are born and have to die, but not in this colossally helpless way. We reject this Death Valley in Bangladesh. We can’t play foul games repeatedly with people’s lives. Today, we have not come here to weep we are here to punish those beastly fellows. We wish to listen to some songs of awakening. Dante’s poem, ‘Langdon’ has now reminded, is not so much about the misery of hell as it is about the power of the human spirit to endure any challenge, no matter how daunting.

The writer is a senior citizen, writes on current and international affairs