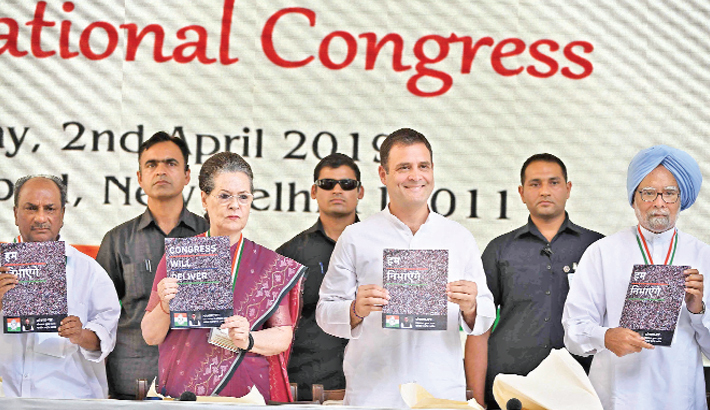 NEW DELHI: India’s main opposition Congress party made election pledges on Tuesday to halve unemployment in five years, but its promise to change a law on special powers for troops in disputed Kashmir drew criticism from the ruling party.

Releasing its manifesto for a staggered general election that starts on April 11, Congress highlighted job creation, tackling farm distress and empowerment of women among its top priorities. Votes will be counted on May 23.

Party president Rahul Gandhi said Congress would expand an existing jobs program to guarantee 150 days of work a year to rural households, up from 100 days.

“The main issues in the country today are unemployment and farmer distress,” said Gandhi, releasing the manifesto. “The economy is jammed, and everyone agrees that India’s economy is stuck, so that needs to be restarted.”

“Over a five-year period, I do think we can bring unemployment down to 3 percent to 4 percent,” Praveen Chakravarty, a party official who analyses data, told Reuters.

“We can certainly more than halve the unemployment number in a five-year period.”

Gandhi said Congress had won voters’ hearts with last week’s plan to hand 72,000 rupees ($1,041) a year to India’s poorest, a promise the BJP has dismissed as a bluff and some economists have called fiscally irresponsible.

“This is an ambitious manifesto,” said Shilan Shah, an economist at Capital Economics in Singapore.

“The income scheme promise, though a worthy initiative, looks implausible to implement, considering India’s limited fiscal space. India does not have the financial infrastructure in place to give such handouts.”

The BJP has focused on national security amid fresh hostilities with arch rival Pakistan, after a February militant attack that killed 40 Indian paramilitary forces in Kashmir was claimed by an Islamist group based in the neighboring country.

Modi’s party came down hard on Congress for its pledge to amend a law that gives special powers to armed forces battling the Kashmir insurgency, in a bid to balance security needs and human rights concerns.

“It wants to deprive them of immunity in what is literally a war zone,” BJP spokesman Amit Malviya said on Twitter. “Not just that, it also suggests that armed forces indulge in sexual violence and torture of civilians.”

Congress, which had accused the government of trying to suppress dissent after a colonial-era sedition law was used recently against students marking the anniversary of the execution of a Kashmiri separatist, vowed to scrap a law it said has been “misused and, in any event, become redundant”.