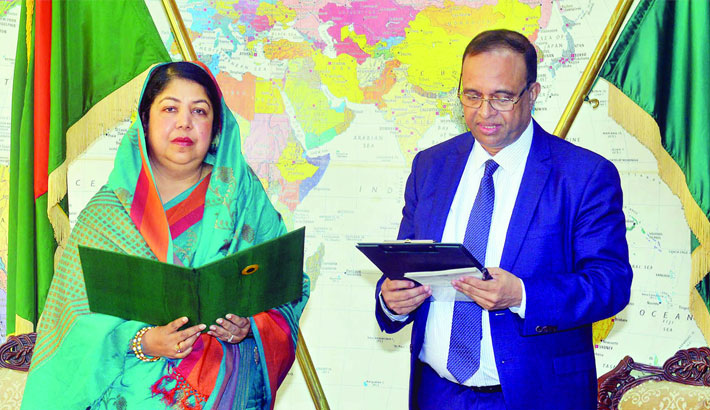 Gano Forum leaders say that Mokabbir has taken oath defying the decision of the party and the alliance under which Gano Forum took part in the polls.

Bringing allegations of vote rigging and irregularities in the December 30 parliamentary elections, BNP lawmakers-elect decided not to take oath.

Jatiya Oikya Front secured only eight seats in the elections.

Gano Forum has got its lone MP, who has been elected with the party symbol ‘Rising Sun’ since the party was formed 26 years ago.

On Monday, Mokabbir Khan sent a letter to the Speaker requesting her to make an arrangement for administrating oath to him.

He was elected from Moulvibazar-2 constituency on BNP’s poll symbol “sheaf of paddy.”

Gano Forum later expelled him from the party for going against the party decision.

Earlier on March 3, both Mansur and Mokabbir sent separate letters to the Speaker requesting her to arrange their oath-taking ceremony on historic March 7. But he did not take oath on that day.

After his swearing-in ceremony, Mokabbir Khan claimed that he has taken oath with the permission from the party.

About the allegation of using party pad without permission, he said they might play a dirty politics on the issue.

“I was supposed to take oath on March 7. But the presidium body of my party took a decision for my taking oath on another day. I came to Parliament Secretariat with the decision and took the oath,” he said.

Responding to a question as to what will be his role in parliament, Mokabbir Khan said he will play cent per cent role of the opposition in the House.

“I must speak for the people and place their thoughts in parliament so that they can hear their words through me,” he added.