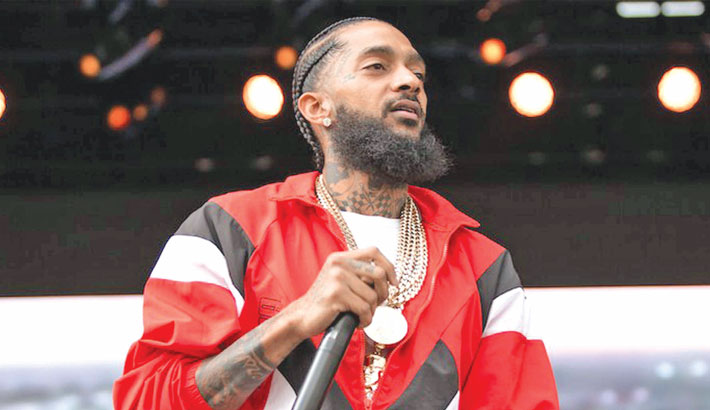 Grammy-nominated rapper Nipsey Hussle was shot dead in the US city of Los Angeles Sunday, sparking an outpouring of grief from fellow celebrities as the city’s mayor blamed “senseless gun violence”, reports AFP.

Local media reported Hussle, 33, was shot in front of his own clothing store Sunday afternoon at close range, by a man who fled in a getaway car.

“Our hearts are with the loved ones of Nipsey Hussle and everyone touched by this awful tragedy,” LA Mayor Eric Garcetti tweeted.

A police spokesman told AFP the suspected shooter remained at large. Two other people were wounded.

The Los Angeles Times reported the shooting was “likely planned and gang-related.”

The Grammy-nominated rapper found minor commercial success but was highly revered among his peers, and his shock death triggered an outpouring of tributes from hip hop royalty.

Superstar Rihanna posted that “this doesn’t make any sense!

“My spirit is shaken by this! Dear God may His spirit Rest In Peace and May You grant divine comfort to all his loved ones! I’m so sorry this happened to you @nipseyhussle.”

Outside his clothing store, a crowd gathered behind yellow police tape, and a grief-stricken woman clasped her hand over her mouth.

At least one cartridge case lay on the ground, near a black ball cap.