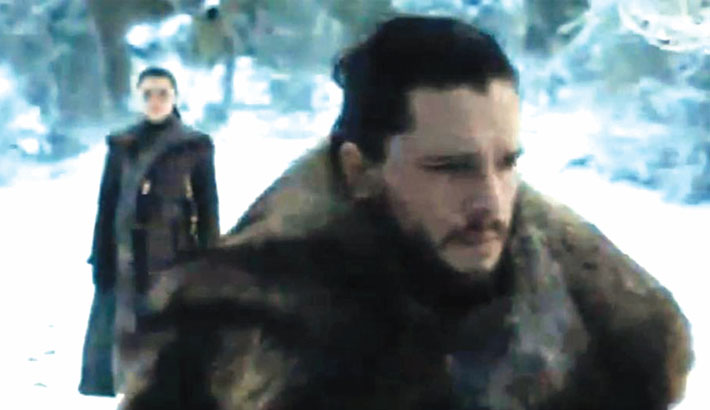 HBO has dropped two short new promos for the upcoming final season of their hit fantasy show, Game of Thrones. The clips have not been shared online by the channel as yet but fans have already made copies of the same from the television telecast and made them go viral on social media, reports Hindustan Times.

The first promo opens with Jon Snow standing underneath the Weirwood tree in Winterfell. He is joined by his sister Arya Stark in the very next glimpse. It’s the most awaited reunion for the show and its fans since Jon and Arya parted ways in season one. We do not see them talk, share a hug or even look at each other’s faces. But they are just a few steps away from each other so the reunion is definitely happening.

The scene is followed by a few little ones which we had already seen in the previous, longer trailer, that released online earlier in March. There is another new clip which shows Tyrion Lannister, Varys and Ser Davos Seaworth looking towards the sky as a dragon takes flight above them. All three men carry a shocked expression. Considering all three of them have spent a good amount of time with the dragons in the last season at Dragonstone, we can assume that they aren’t impressed by the dragons but by the one who is riding them. Could it be Jon Snow?

The second promo begins with Tyrion. He is seen telling someone: “We must fight together now, or die.” It is again followed by some footage from the last trailer of the Golden Company, the Unsullied reaching the gates of Winterfell and Rhaegal and Drogon flying above snow-capped mountains.

There is also a short new scene between Daenerys and Jon. She is seen looking into the fireplace with her face away from Jon. Her braids have grown in number, tying all of her hair together. The air between the two feels heavy as Jon leaves her with a torn expression on his face. We also catch a glimpse of Beric Donadarrion with his flaming sword and Jon and Arya in the battlefield.

Game of Thrones returns one last time on April 14 with six new episodes of 60-90 minutes runtime. The show will be followed by a documentary that will take fans behind the scenes and several prequel series, which are already in production.