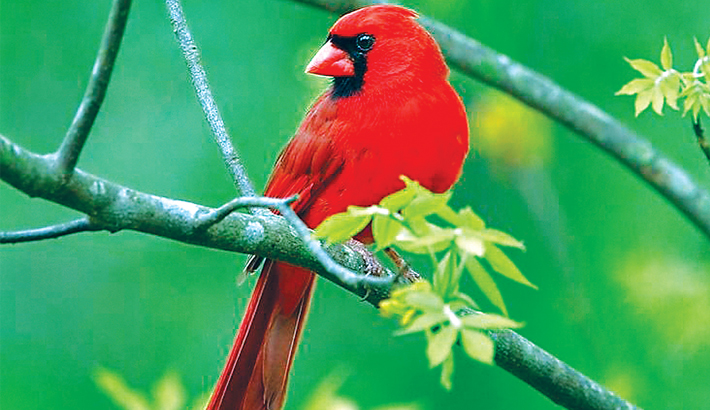 With wide variety of colours, beautiful wings, different types of beaks, various shapes and sizes birds are probably the best creation of nature. Access of birds is wide to Bengali literature. The cuckoo of spring has become famous (or infamous) in writings of Bankim  Chandra Chaterjee. Rabindranath, Nazrul and many other poets have referred to birds in their writings but in fact, birds are mostly found in the peons of Jeevanananda Das. To be more specific, in Ruposhi Bangla.

Undoubtedly, the best collection of poems of Jeevanananda Das is Ruposhi Bangla which was published in 1956 i.e. two years after his death. In manuscript the name was Ruposhi Bangla and finally it was published in that same name. It is beyond question that the name is very much justified. It is an anthology of 61poems but only 4 have names. Those are – Raven (Darkak,25), Rainwater (Brishtir Jol, 46), In memory of Deshbandhu 1326-1332(23) and In memory of some days of 1326 (44). Other 57 poems are nameless. Poem no. 2 is the smallest with only 4 line and poem no. 61 is the longest having 25 lines. In fact, it is a combination of two poems. Out of 6l poems in Ruposhi Bangla there is no reference to birds in only 9 poems.  In other 52 poems birds have been mentioned 127 times, from once to 7 times in a single poem. Birds have been referred to maximum 7 times in poem nos. 16 and 29, 6 times in poem no. 24, 5 times in poem nos. 33, 34 and 38, 4 times in poem nos. 17 and 61, thrice in the poems. Names of birds are found twice in 20 poems and once in 12 poems. Let us try to know the se birds in detail.

23 types of birds are found in Ruposhi Bangla which are black dingo (commonly known as finga), bat,  chokore, crow, cuckoo, dove, duck, hawk, kingfisher, kingstork, magpie, bou katha kao, pigeon, nimpakhi, shuk, owl, hiramon, robin, sparrow, shalik, shapmashi, shyama (Indian cuckoo) and wagtail (khanjana). Other than a few exceptions these birds are very much familiar to us and are always found around us. Chakore, shuk (talking parrot), shapmashi and hiramon are totally unknown to us. Black dingo (finga), kingstork, kingfisher and khanjana normally live in marsh. Residence of other birds are in locality, around and within us

Shalik is very familiar to us. On branches of trees, roofs and premises this bird is always found. Journey is happy if two shaliks are found – such a superstition prevails among many people. It is said that shalik is one kind of quarrelsome bird. This bird has been mentioned 20 times in 18 poems, twice in poem nos. 24 and 34. 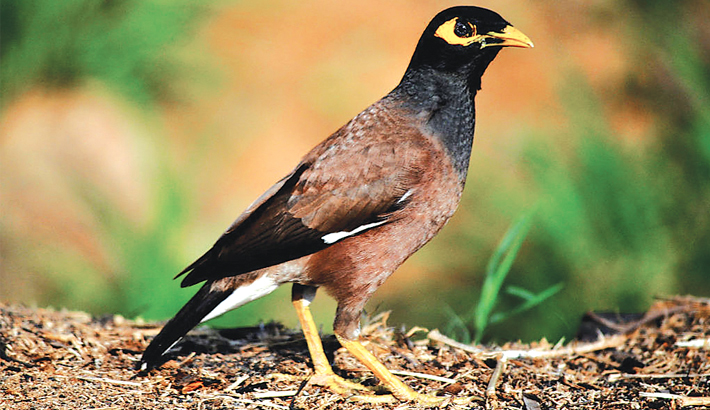 We know the name of owl. Zoologist say that owl is a night faring and hunter type of bird but lonely in nature. It is very difficult to come across an owl by day. Even at night they are not easy to find but their voice is heard sometimes in rural areas. Kaliprasanna Singha became famous for his belles-letters Hutom Paynchar Noksha (published in 1861, 1863 and 1864) which is mainly a social satire aimed at newly rich people and people of all types of the then Calcutta (present spelling is Kolkata). Sukumar Roy has written a very beautiful rhyme name  Pyancha Aar Pyanchani. Sukumar Roy is king of laughter. So, his owl and owl of romantic poet Jeevanananda must be different in nature

Owl has been referred to in 18 times in 17 poems. Nimpyancha has been mentioned once in poem no. 21 and in other 17 poems it is simply owl or Laxmipyancha. It is very difficult for us to differentiate between owl and nimpyancha or Laxmipyancha but it is not so relevant.  As owl is the carrier of Laxmi (Goddess of wealth, as believed by the Hindus), owl has been named Laxmipyancha or Laxmi owl. Natural colour of owl is grayish black but from dictionary it is known that Laxmi owl is bigger in size, colour is whitish and its audible power is very keen.

Another night faring bird is bat. Normally it stays on branches of high trees like pine at day time. Though a mammal, as a result of having wings, bat is a member of bird species. Bat is not at all good looking but it has been mentioned in 7 poems.

Another known bird is kite or hawk which is a member of eagle species. Though a hunter bird it is not night faring like owl. Its normal abode is high trees like palm, coconut or rain tree but due to random felling of trees and natural disaster its abode is under threat and hawks are gradually becoming rare. Chill (hawk), grandchild (river hawk) and shankhachil (conch hawk because portion of its body is as white as conch) have been referred to in 10 poems.

Duck has been mentioned in 6 poems and swan in 2 poems. Singer bird shyama (Indian cuckoo) is found 5 times in the poems. Continuously fickle and always dancing bird khanjana (wagtail) is found in 4 poems.. Colourful and very beautiful fish eating bird kingfisher has been mentioned  4 times in the poems. Finga, kingstork, shuk  and nameless birds are found 3 times each.

Small in size and innocent in nature is dove. It normally lives in locality within human habitation but in the realm of birds dove is not much reputed. It is said that you have seen dove but not the trap. There is a proverb in Bengali – grazing dove on homestead which means to ruin anyone. It may be a subject matter of linguists why and how this proverb has evolved. However, fame or slander, whatever be, is imposed by man which matters nothing to dove but in Ruposhi Bangla dove has been depicted as symbol of peace. “ Here peace comes in the minds of people with the voice of dove” (34). Again, the poet has said, “All doves of the world are chirping in hizal bushes” (60). This is a unique capacity of Jeevanananda to bring all doves of the world on a single platform.

Shapmashi ( not actually a bird, rather a large green winged grasshopper) and our very familiar bird, i.e. domestic bird, the sparrow have been mentioned twice each. Jet black singer bird the cuckoo, a favourite bird of poets, has been referred to in 2 poems, 4 times in no. 31 and once in no. 33. Though adored in poems and songs, bou katha kao (Indian nightingale, actual name is papia) is not so familiar to us. It is a singer bird of the cuckoo type but rarely seen. Sometimes, breaking the silence of rural noon, sweet songs of papia is heard.

From dictionary it is known that chakore is a bird that becomes satisfied with drinking moonbeam. It has been mentioned once in poem no.34. Not actually a domestic bird but a bird in bush beside our houses is magpie robin. Fully domestic and a favourite bird of zamindars is pigeon. These two birds have been mentioned in 2 poems – 4 and 24. Shuk (talking parrot) and hiramon are refereed to in 4 poems. These are believed to be mythological fortune telling birds though it is uncertain whether such birds exist in reality.

What was the favourite bird of Jeevanananda? The question is very easy but the answer is very complicated. If judged on the basis of numbers, then competition would be tough among shalik, owl and crow because these three birds have been mentioned 18,17 and 16 times respectively in Ruposhi Bangla. The poet has visualised shalik simply as shalik but in different situations - quarreling on mango trees, flying with hay in mouth, sitting in flocks on bank of the Dhaleswari, making noise with other birds, picking paddy from premises, rubbing wings on premises with soft yellow legs or dancing in darkness, sitting exhausted at Kalidah, losing life in storm  etc. Every picture is very familiar to us but on the other hand, a dead shalik does not escape watchful eyes of the poet. In poem no. 19 the poet says that the shalik that dies in fog does not come back. It is natural that a dead shalik ( or any dead animal) would not come back but dying in fog remains obscure as fog itself is.

There is not much variety in shalik but owl comes to us in different types  like Laxmipyancha, Nimpyancha or simply Pyancha (owl). In the very first poem the poet says ,“ Wouldn’t Laxmipyancha sing for its Laxmi?” Owl is not a singer bird and its voice is not at all sound sweet. Rather, it creates an uncanny feeling but in the eyes of Jeevanananda this hunter owl becomes a singer, even tells stories. The poet can listen to song of owl in many ways though it does not only sing but weeps also (poem nos. 22 and 41). Even wings of owl get language in the hands of the poet and talks with fireflies at night (47). Sitting on different branches of trees the owl is sometimes quiet, soft and shy also (61). In many ways the poet has viewed owl but even after that some longings remain which has been told in the last poem that he has never seen the face of that Laxmipyancha clearly.

The crow is not also less important in Ruposhi Bangla. Out of 61 poems only 4 have names and one of those 4 is Darkak, poem no. 25. A crow flying with a hay in evening, continuously sounding crow on the branches of a rain tree, a crow searching its nest, even a dead crow does not escape eyes of the poet. It is known to all that beaks of the parrot are red but when the poet tells of a raven with red beaks we get confused because beaks of raven are always black. There is no possibility of its being red but Jeevanananda is that poet who can walk for a thousand  years on the ways of this world, who can hear the sound of dew and find scent of sunbeam. For such a poet it is not a matter of wonder that beaks of a crow would appear read. In this  place where he is unique.

These three birds are found jointly in 2 poems (16,29). Though name of a poem is Darkak and shalik has been mentioned in highest number, the poet is perhaps inclined to owl because shalik or crow do not have much specialty which owl has. We find a dead shalik or dead crow but not a dead owl. Debate may run regarding the favourite bird of Jeevanananda but no doubt remains about his inclination towards owl.

Bankin Chandra has written about the cuckoo, Rabindranath has not mentioned names of the birds in HIng Ting Chhot or Dui Pakhi or in his songs on the spring (Oh, in this spring /so many flowers bloom /so many flutes play/so many birds sing) which we get from Jeevanananda. Except Ruposhi Bangla flock of so many birds are not found in poems or writings of any other Bengalee poet.