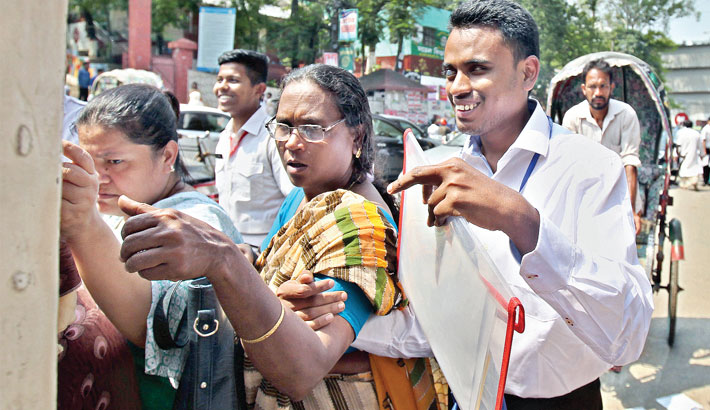 Visually impaired Tanmoy along with her mother Champa Dutt is getting into a bus after attending an examination of Higher Secondary Certificate (HSC) on Monday. The photo was taken from Chawkbazar area in Chattogram city. – Rabin chowdhury

CHATTOGRAM: Tanmoy Dutta was born blind but the vision impairment could not stop his battle for a better life.

Tanmoy, a student of strong mental power, is sitting for HSC examinations with the help of an assistant.

He is a student of humanities group at Chattogram Government City College.

Tanmoy’s father died in 2009 when he was only eight.

Talking to the Daily Sun after attending his exam on Monday, Tanmoy said a social environment is the main barrier to the advancement of the physically-challenged people in the country.

He, however, said there are some people in the society who come forward to help the people with disabilities.

Champa Dutta, mother of Tanmoy of Gourala area under Patiya upazila, has been struggling for developing her son since the death of her husband, he said.

The Champa couple has five children and Tanmoy is the second among them.

Tanmoy further said that his elder sister is a police constable. His young sister is a student of Chittagong University, another sister sat for SSC exams this year and his youngest brother is a class-VII student.

Completing the Primary Elementary Certificate (PEC) exams from Muradpur Andhobadhir School with GPA 3.75 in 2012, he got admitted to Forest Research School.

He came out successfully with GPA 3.95 in the Junior School Certificate (JSC) from the school in 2015.

Narrating his barrier to the way of life, Tanmoy said he has to face manifold problems to carry out study.

Managing an assistant for writing at the exam hall is one of them as the person who passed the same examination earlier is not allowed to assist the blind examinee.

Tanmoy informed that he has been sitting for the HSC examinations, staying at the residence of his elder sister in Agrabad area.

“I used to attend the classes at college one or two days a week as my mother could not give me time regularly,” he said.

“I memorise the lessons by hearing recorded topics,” he said, adding that a non-government organisation ‘YPSA’ helped him to get the recorded topics.

Expressing his desire to be a teacher, Tanmoy wanted to continue his study with support from all.