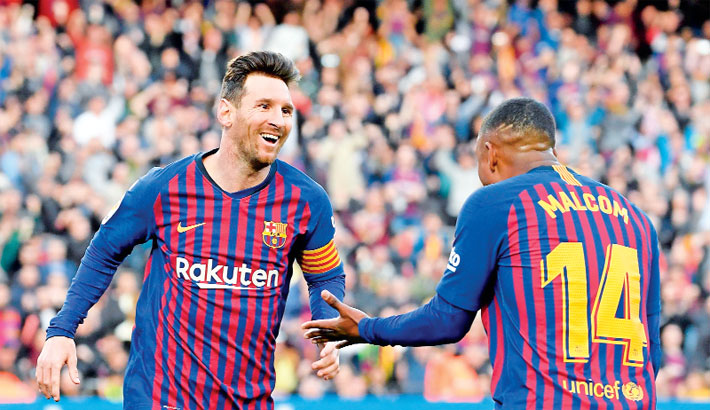 Lionel Messi continued his remarkable run of form with a second-half double as Barcelona continued their march towards the La Liga title on Saturday with a 2-0 win over Espanyol while Costa curler helps Atletico Madrid back to winning ways with 4-0 victory over Deportivo Alaves on the same day, report agencies.

Espanyol gave their city rivals a tough game at the Camp Nou, but Messi’s chipped free-kick with 19 minutes to play and a late second sent the reigning champions 13 points clear at the top ahead of second-placed Atletico Madrid’s game at Alaves later on Saturday.

Messi has now netted eight times in his last four games for Barca, and leads the way in the La Liga scoring charts with 31 goals, 13 ahead of teammate Luis Suarez.

“I had no idea he would hit (the free-kick) like that,” said Barcelona coach Ernesto Valverde.

It was a fitting way for the Argentinian to mark his 675th Barcelona appearance, which moved him ahead of Andres Iniesta into second on the club’s all-time list — 102 adrift of Xavi Hernandez.

He made a low-key return to international action in midweek as Argentina lost a friendly to Venezuela, but Valverde was delighted it did not affect Messi on Saturday.

Earlier on Saturday, fourth-placed Getafe missed the chance to solidify their spot in the Champions League places as they slumped to a 2-0 home defeat by Leganes.

At Mendizorroza stadium, It was a commendable display from the visitors, who lost back-to-back matches to Juventus and Athletic Bilbao before the international break to effectively end their hopes of finishing the season with a trophy to add to last August’s UEFA Super Cup triumph.

Playing on the right once more, Griezmann did a lot of good defensive work to cover for Juanfran on top of his typically creative attacking display. He created three chances, earned one assist and was inches from a goal of his own.