Spinners should support the pacers in WC: Miraz 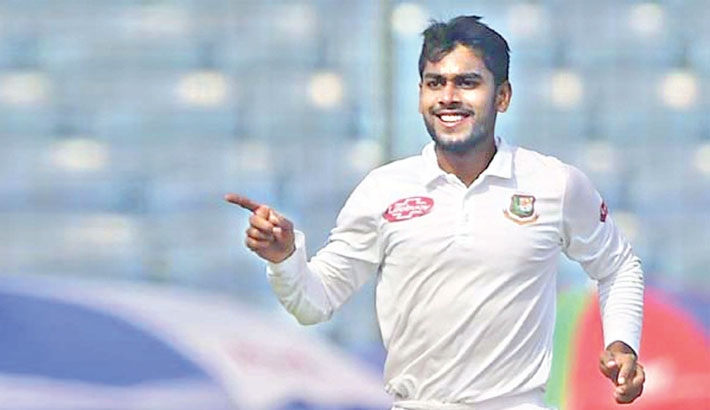 Complementing the pace bowlers and controlling the flow of runs will be key for spinners in the upcoming World Cup, said off-spinner Mehedi Hasan Miraz on Sunday.

England will host the upcoming World Cup and it is expected that pace bowlers will be dominating the scene due to their weather and condition.

According to Mehedi if they want to do well in the tournament than they will need to bowl in partnership as that will help them put pressure on the opponent.

“I think it’s very important for the spinners to contain (check) runs. Because, the spinners will not get any help on those countries,” Mehedi told reporters at Mirpur on Sunday.

“Have to do economical bowling if you can’t get wickets. I think a good bowling figure will be 5/5.5 runs per over,” he said.

“It will also be better, if you can take 2/1 wickets. The main role played by the spinners in the World Cup will be to help the pacers,” Miraz said.

“The responsibility of our spinners is to support the pacers. Because the role of spinners would have been certainly different if the game had held in the sub-continent. But, now we have to support pacers in England. If we minimise their workload our team will play better,” he said.

Mehedi believes that they should take preparation for the biggest global tournament during the ongoing Dhaka Premier League.

“We have Ireland series ahead, and then we will go to play the World Cup. It seems to me that we should get ready within one month after the ongoing premier league because we will have not much time after that,” said Mehedi adding that he is looking forward to preparing from the upcoming league matches.

“We have not got much time after that, so have to take preparation during this premier league. I have been bating for a long time today (Sunday).  I will play a game tomorrow, I will bowl again the very next day, and will do a workout in gym,” he said.

Mehedi said spinner need to have patience as there will not be much spin in England.

“I was with the team, when we played the Champions Trophy in England. Though I have the chance to play one match. I have seen wickets very closely, very good wickets. If I try to bowl in a good place, then the batsman may make a mistake,” said Mehedi.

“There will not be much spin, the ball comes to bat nicely. Have to bowl according to the plans. I will now work on this… how to execute plans. Hopefully, we can do well altogether,” he said.

Mehedi added that for the time being he is looking forward to make him competent so that he can add some runs in the end.

“Have to work on fitness within this one month of the premier league. There are some drills also, and some bowling skills have to improve.

“I am now working on it… how to do the 20/30 runs at the end. Because at that time, many good bowlers come to bowl, and there are also different fielding sets.

“I am preparing on those things… can deal with those situations. I have seen it in New Zealand.  The conditions of England are very similar to New Zealand. So, I have been able to find my lacks and improvement from New Zealand. Now I want to use those in the country,” he said.

“I believe our team is very good and the 20-30 runs are very important during the crisis. I’m working on it, I can’t a get a chance to play a big innings. The team expects from 20/30/40 runs or a partnership at the end which can be helpful for the team,” he concluded.