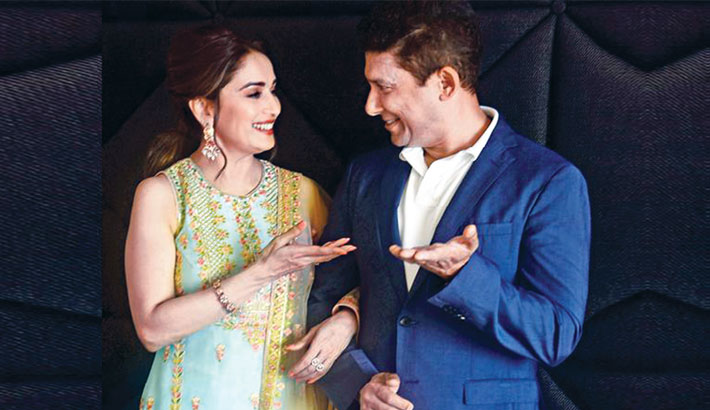 Almost two decades after they tied the knot, Madhuri Dixit and Shriram Nene felt like they were doing a bridal photo shoot yet again. The photographer kept telling them how to pose, stand closer and look at each other. Amused, the couple could not help but giggle. Dixit's trademark gorgeous smile lit up the room at a Bandra hotel. The duo is launching their first film production, 15 August, under their banner, RnM Moving Pictures. The slice-of-life Marathi film dropped on Netflix, on Friday, reports Mid-day.s

Dixit has been facing the camera and fielding questions for years but for hubby dearest it's new. So, she lets him do most of the talking and refrains from saying anything, except when asked a question. And Nene has lots to say. Is this new phase as doctor-turned-filmmaker exciting or exhausting? "It is an exciting learning experience," he says in his Yankee accent.

"You pour your heart into something and share it with the world, it's gratifying." Before he married Dixit, he barely watched Indian films and did not know Hindi. "Abhi sabh samajhta hoon," he laughs. After relocating from the US, the actor says, "He now understands and can speak a bit."

Nene admits that from not watching movies to being a filmmaker has been quite a journey, "but every summer we came to Dadar to live with relatives, so there was that exposure to the Mumbai milieu. Life is all about constantly learning something new. I still, however, remain a doctor. We wanted to raise the bar by doing something new."

When they floated the production house, each of them designated clear-cut roles to themselves. "She looks after the creative side. While I am in charge of the production and financial aspects, more like a company's CEO," says Nene. "She has over 35 years experience in the movie business," he adds. So who better than her to team up with? He keeps referring to his actor wife with 35 plus years in the business. "He is making me sound like a really old veteran," smiles Dixit.