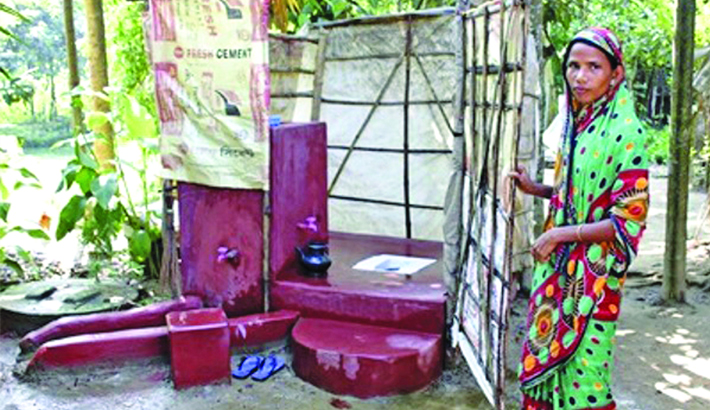 Ever since the SDGs took shape, Bangladesh has made significant strides towards achieving them. Being one of the top-performing countries of the MDGs, Bangladesh has been focusing on its internal resource mobilisation and leveraging on its democratic institutions to leave a mark in terms of attaining the SDGs as well.

Goal 6 of the SDGs focuses on ensuring availability and sustainable management of water and sanitation for all. The target 6.1 of this goal mandates that by 2030, universal and equitable access to safe and affordable drinking water for all must be achieved. The target 6.2 mandates that by 2030, access to adequate and equitable sanitation and hygiene for all must be achieved and open defecation must be ended, paying special attention to the needs of women and girls and those in vulnerable situations. These are the two targets Bangladesh has been prioritising in terms of goal 6. More specifically, the core targets set by Bangladesh in alignment to the vision and goals of the 7th Five Year Plan in the WASH sector includes providing safe drinking water for all, increasing the proportion of the urban population with access to sanitary latrines to 100 per cent, and increasing the proportion of the rural population with access to sanitary latrines to be raised to 90 per cent.

Before the efforts towards attainment of the SDGs were initiated, the coverage of safely managed water service was 56 per cent, 61 per cent of which was in rural and 45 per cent was in urban. The coverage of safely managed sanitation service, on the other hand, was only at a mere 32 per cent in the rural areas and basic service coverage was at 47 per cent, out of which, 54 per cent was in urban and 43 per cent in rural. A nationwide baseline survey conducted in 2013 with the underlying objective of assessing the sanitation coverage in the country revealed this abysmal sanitation scenario prevalent in the country. The survey also revealed that only 33 per cent of the households had hygienic latrines, while 25 per cent had unhygienic ones. A staggering 55 million (42 per cent of households) did not use any form of a latrine. 42 per cent of the people defecated in the open.

However, the situation has changed a lot since then. The political commitment of the government and a multi-stakeholder approach has led to remarkable improvement in overall sanitation coverage. According to JMP, in 2015, Bangladesh made good progress towards the SDG targets. Open defecation has been reduced to only 1 per cent a milestone change from 42 per cent in 2003. The improved sanitation coverage is at 60 per cent, an increase of 28 per cent since 2003. However, still 28 per cent of the people are sharing latrines and 10 per cent of the people are using unimproved latrines. The status of the hygiene scenario has also seen emblematic shifts over the years, where the proportion of open defecators has dropped by 32 per cent, from 68 per cent in 1990 to 36 per cent in 2015 in South Asia. However, with regard to Bangladesh, there is a significant inadequacy or unavailability of data on and washing/hygiene indicators necessary to measure the impact of the strategies employed in this regard. In the first-ever national survey conducted by ICDDR,B, it was revealed that more than two-thirds of the households have a post-defecation handwashing facility near the toilet and, only 40 per cent have water and soap available. The observed data shows that only 13 per cent of children aged 3 to 5 years of age and 57 per cent of mothers/female caregivers washed both their hands with soap. The latest scenario is expected to have improved further although data is not yet available.

Although Bangladesh has made remarkable progress in terms of attainment of the WASH targets, the road has not been smooth. Particular challenges of the progress of Bangladesh in the sanitation sector is the quality of service and coverage in the Hard to Reach (HtR) Areas i.e., hilly regions, islands (chars), swamp (beels and haors), tea gardens, water-scarce areas. There are still obstacles in providing access in the climate change vulnerable areas, as well as in rapidly growing urban slums. Another challenge is the frequent floods, cyclones and other natural disasters posing a hindrance to the operation of sanitation facilities, lowering the sanitation coverage in the coastal areas. Exclusion of sanitation coverage has been noticed for those vulnerable to climate change. Sustainability, hygiene issues and total sanitation coverage are also some challenges.

Despite the commendable strides in the health sector, there still remains several shortcomings in the health system. Effective coordination between the two different ministries (i.e., MLGRD&C and MHFP) must be ensured for the implementation of primary health-care services in rural and urban areas. Most significantly, the annual allocation to the health sector in the government budget must be increased in alignment with the achievement of universal health coverage in the country.

At present 99 per cent of people in Bangladesh are defecating in a fixed place, a monumental achievement for Bangladesh, though all are not sanitary latrines. To further improve the scenario, shifts need to be made from fixed place defecation to improved and hygienic latrine use along with proper management of fecal sludge.

The political commitment of the Government of Bangladesh (GoB) to sanitation has catalysed the sanitation movement in the country. Various policy reform initiatives to improve the effectiveness and efficiency of service delivery in this sector have been instrumental in this regard. The Policy Support Unit (PSU) of LGD with support and assistance from DPHE and other stakeholders has been providing technical assistance to the government to develop several water supply and sanitation-related policies, strategies and guidelines that have helped achieve the WASH milestones. However, there is still a long way to go towards consolidating the SDG WASH goals. In order to champion the goals, a tripartite collaboration between the government, non-government and private sector is imperative. With sincere commitment, we hope to set a benchmark in terms of actualisation of the SDGs.