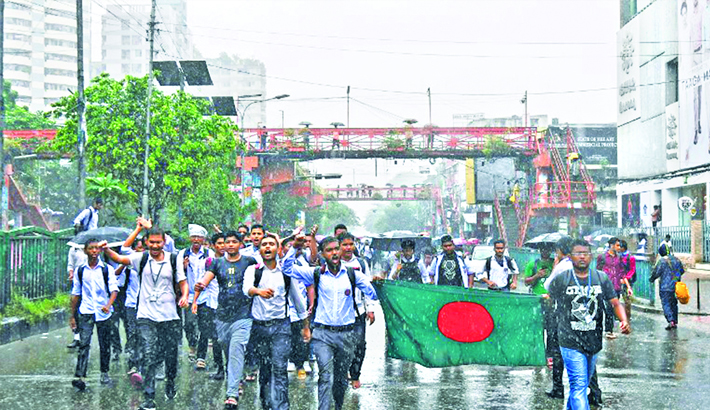 For a country that was liberated by the awakening of its student protests, the irony lies how the government does not meet the demands of the student protests that take place now. An accurate example of this happened a few days ago when a first year honours student was killed by a bus which was on a mad race. Whereas, just six months back, the country was brought to a standstill for over a week due to protests for a similar event where some students were smashed by a bus.

I was not shocked when I read about the death of Abrar Ahmed Chowdhury, but I felt tired thinking about how students are going to protest again for something that might not be fulfilled by the government. It’s like the government has turned a blind eye on us. “They are students, they will protest for a few days and then go back to their homes after some consolation.”- this might be what the government thinks whenever there is a student protest. If our protests had made any effective changes, then maybe Abrar would have been alive today. He died due to the same cause for which he protested for last year.

The student protest for road safety in 2018 had demands including that all vehicles should have fitness certificates and drivers must have proper license to drive the vehicles. This is where the irony lies, the driver who was driving the bus that killed Abrar was not licensed to drive public buses. So, did the student protest last year go in vain? Partially yes! Does that mean we should stop doing the protests? Obviously, no! Because of the protest last year some things have changed - the people. Now, a few bus drivers are hesitant to drive harshly. Passengers revolt when drivers begin to drive recklessly, and people on the road are scared to jaywalk across the road daringly. Maybe, after this protest some more bus drivers will be careful, because they know now that we will not stop until they stop. If the government does not change anything, the people will keep on protesting for change. We will make them change. But how many Rajib, Mim and Abrar do we have to lose for that?