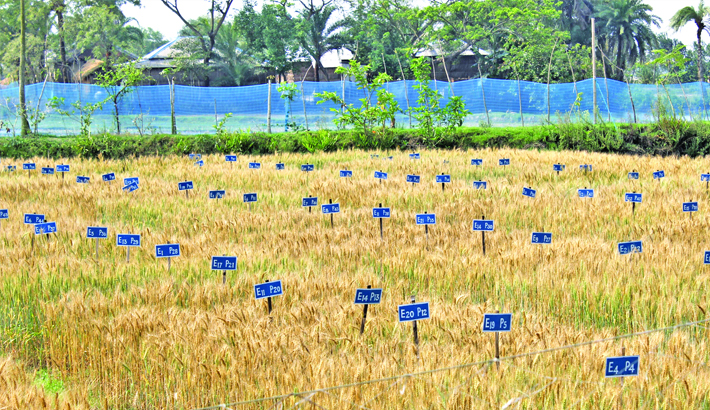 Under financial support from ACIAR (Australian Center for International Agriculture Research) and KGF (Krishi Gobeshona Foundation), a collaborative research project is being implemented by the University of Western Australia along with Bangladesh Agriculture Research Institute, Bangladesh Wheat and Maize Research Institute, Bangladesh Agricultural University and CSIRO (Australian national research institute) at coastal area of Bangladesh. The main objective of this program is to develop salt and stress tolerant wheat and pulses crops and its production technology in saline soil, so that poor farm families of coastal areas may able to cultivate such crops in their fallow salty land in dry season which will ensure food and nutrition security at farmers level in coastal area.

During first year program in 2017-18, twenty four wheat genotypes from home and abroad were tested for salinity tolerance in southern Bangladesh like Batiaghata, Dumuria, Satkhira, Patuakhali, Barishal and Barguna. Out of twenty four genotypes, scientists from Australia and Bangladesh identified three most potential genotypes as salinity and stress tolerant genotype. Based on outstanding performance in the first year experiment, scientists from Australia and Bangladesh were interest to consider more salinity prone area for screening such 24 wheat genotypes to find salinity tolerance capacity in the second year program. Thus, the project included Koyra and Dacope under this research program as the most salinity prone area of Bangladesh instead of Batiaghata and Dumuria.

Scientists are collecting soil samples in different stages of wheat by the use of EM38 (Electro Magnetic) device which was collected from Australia as unique device to measure salinity of soil effectively.

Hopefully the government will come forward to take special initiatives in near future about this research finding.

Local community leaders also expressed that by using early rainfall which is now happening almost every year, the Ministry of Agriculture can develop a project to extend the technology at community level through block system. We hope, farmers will be able to cultivate wheat and pulses successfully in their fallow land after harvesting of Aman rice and avail a better life in coming days.