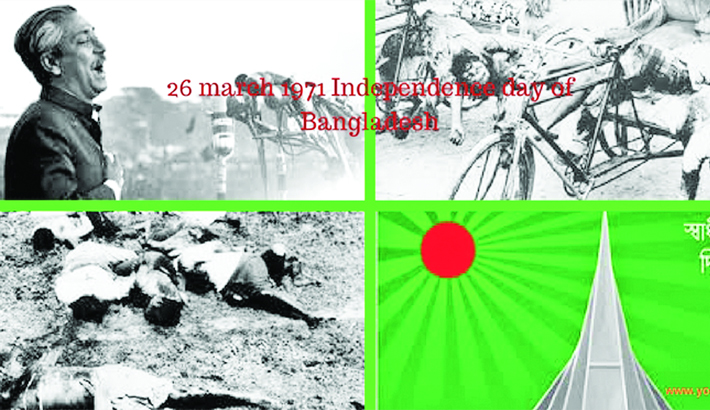 The Independence Day of Bangladesh is the day on which we got freed from the shackles of the colonial rule of the Pakistanis. It is the outcome of events that happened during the 23 year period after 1947 that equipped the Bengalis to face any challenge to come. This is the day following the horrific blood stained night of March 25 when the occupation forces brutally killed innocent students, teachers and staffs of Dhaka University along with intellectuals of the soil to subjugate the Bengalis who were vocal for independence.

Following the failure of dialogue between military junta, Yahya Khan and Bangabandhu Sheikh Mujibur Rahman with regard to peaceful transfer of power to the latter who bagged the majority of seats in the general election of 1970, Bangabandhu declared the independence of Bangladesh for which the whole Bengali nation was united behind him.

Actually, in the name of dialogue the military junta was passing time, making deep conspiracy against the Bengalis, bringing arms, ammunitions and soldiers from West Pakistan to use against the Bengalis to stop their voice for freedom. So, this day is intertwined with the memory of the father of the nation Bangabandhu Sheikh Mujibur Rahman who guessed beforehand what might happen after the dialogue. So, he made a clarion call on March 7, 1971 at the Race Course ground to resist the oppression and massacre of the occupation forces, it was a directive providing guideline for independence of the nation.

The speech was an elixir; reawakening Bengali nationalism from a deep coma. The whole nation stood united behind this versatile leader with magnetic personality who spellbound the people by his speech as if he was the Pied Piper of Hamelin. Fidel Castro, president of Cuba rightly said, “I have not seen the Himalayas; but I have seen Bangabandhu.”

At home and abroad, he was popularly known as Bangabandhu. Besides this, he was crowned with another connotation- “The poet of politics”, who did not need any draft to address mammoth public gatherings. Whatever he delivered was extempore. But one of his spontaneous deliveries is deemed as one of the finest literature now. In addition, his roaring voice added beauty to the literature that erupted out from his mouth being charged with emotion and anger to awaken the impoverished people who were in miserable condition and socially, economically, politically and intellectually the worst victims of exploitation by the Pakistani regime.

There was a tremendous mental pressure from within and from the student leadership to declare the independence of Bangladesh. But Bangabandhu followed a ‘go slow’ principle lest military junta along with foreign countries blame him (Bangabandhu) for disintegrating Pakistan. So, he was very tactful in using words. It is evident in his March 7 speech. He said “This struggle is for freedom”. The word freedom here indicates dual meaning on socio-economic perspective. The meaning refers firstly to economic emancipation and secondly to make our land free from the misrule of Pakistani regime.

He could have used other tougher words but he did not. It was crystal clear from his speech that Bangabandhu was hundred per cent democratic in action and intention. So, he underlined the necessity of dialogue to solve the crisis which evolved from economic disparity between the two wings of Pakistan. But all his efforts ended in the smoke for the insane passion of Zulfikar Ali Bhutto, the then chairman of the Pakistan People’s Party.

Bangabandhu’s bewitching speech and affectionate addressing, “Brothers of mine”, took him closer to the hearts of the people which cannot be deleted by any means.