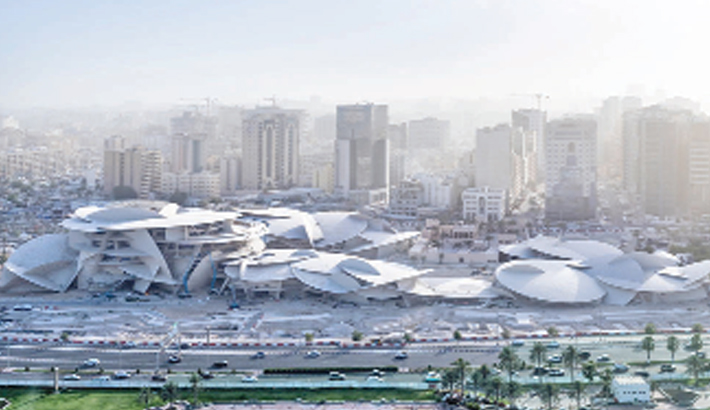 DOHA: Almost a decade in the making, three years late and at an estimated cost of $434 million, Qatar’s vast national museum, built in the shape of a desert rose, opens this week, reports AFP.

“Architecture to give a voice to heritage whilst celebrating (the) future,” tweeted the museum’s renowned French architect Jean Nouvel, also responsible for the Louvre Abu Dhabi.

The pale, futuristic 52,000-square metre structure located on Doha’s waterfront corniche will be the first notable building visitors to Qatar see as they make their way from the airport to the city centre.

Even in a country which is being built, rebuilt and utterly transformed for the 2022 football World Cup, the national museum could be the single most eye-catching design of all Qatar’s new buildings.

The entrance includes 114 fountain sculptures in a 900-metre long lagoon and the museum’s multi-curved roof, which resembles a giant jigsaw puzzle, is made up of 76,000 panels in 3,600 different shapes and sizes.

Inside, there is more than 1,500 metres (yards) of gallery space.

Among the exhibits is a 19th century carpet embroidered with 1.5 million Gulf pearls and the oldest Koran yet discovered in Qatar, also dating back to the 1800s.

“This is a museum that narrates the story of the people of Qatar,” Sheikha Amna bint Abdulaziz bin Jassim al-Thani, the museum’s director, has stated.

The National Museum of Qatar also stands on the site of the former palace of Sheikh Abdullah bin Jassim al-Thani—son of the founder of modern Qatar. The palace has been restored as part of the massive project.