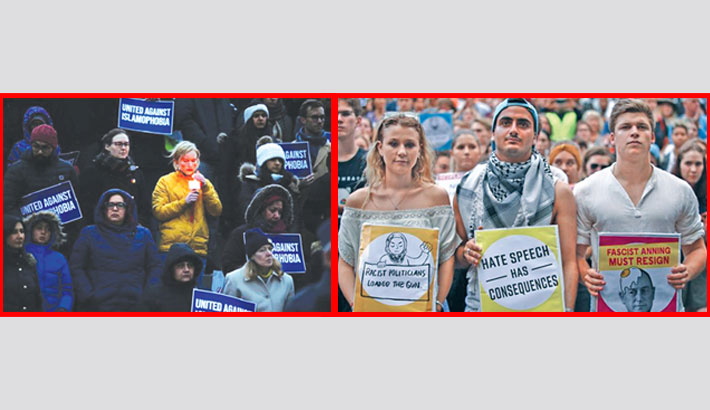 Growing up in a middle class family in Dhaka, I had always envisaged everything to be sunshine and rainbows in the west. Being an average Joe, I unabashedly held high regards for their politics until someone popped my bubbles a few years back.

I clearly recall that I was in my sophomore year in junior college when Trump was vying for the US presidency. His presidential campaigns gave some inkling of white supremacist ideas. Although majority people in the US and around the globe did not let it go by without batting an eyelid, but when he spewed venom against Muslim refugees and immigrants, blatantly espousing his xenophobic ideas, he found many who agreed with him.

When in such a global crisis as the Christchurch act of terrorism, most world leaders are jointly condemning this heinous act, Trump is the only one who seems to be rather in cahoots with the perpetrators by simply eschewing it. It rather seems to him a bagatelle that 50 innocent lives had to bear the brunt of xenophobic notions implanted into millions by people like him around the globe. In fact things would not have come to this point had politicians like him not put a bug in the perpetrators ears which led him to espouse their xenophobic ideas.

It is only cognizance that can put an end to such heinous crime. What is silver lining for me is the fact that people like Will Connolly (who hogged the limelight by egging Australian right-wing senator Fraser Anning lately) are standing up to these xenophobic preachers. We need more people like Will to make this earth a more habitable place for all regardless of race, religion, ethnicity and nationality. It is through cognizance that one can overpower bigotry. Issues like these should not be kept in the back burner but rather should be addressed through cognizance. Only then can the world citizens expect perpetual blissful global peace to start its own course.