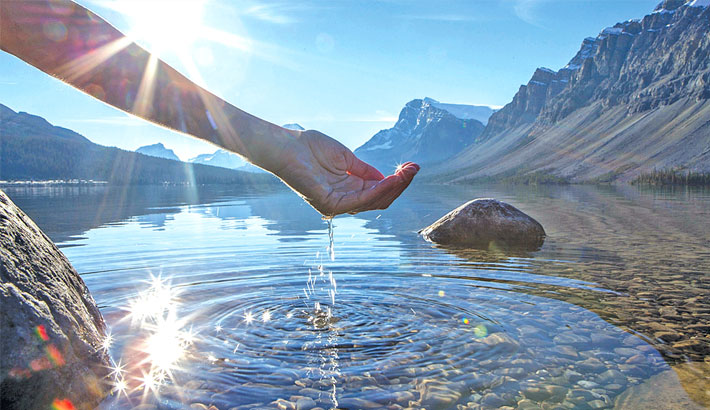 Water is everywhere around you but if you need to drink water you can never drink it without thinking. Seas represent salt water accounting for 97.5 per cent of all the water on earth. Almost 1.75 per cent water is frozen at the poles, as glacier or permafrost. The world in which we live relies only on 0.75 per cent of available water of which only 0.3 per cent contains surface water.

NASA has recently published a report about water amounts and established a motto-slogan “Follow the Water”. They said human body is made up of 70 per cent water and 70 per cent of earth surface is also covered by water. So, water is a common building component between human body and the earth.

Water helps the environment grow plants, give oxygen, produce food which are essential to human life. The present world has become thirstier and reached its natural limit of consumption. People ignore the fundamental human right of free access to water and not having to pay for it.

UN latest annual “world water development report” indicates 73 per cent of world population live in Asia in water scarcity. Global water use has jumped six times in the last century and expected to increase 20-50 per cent by 2050. So ground water depletion is a big threat to water scarcity not only in poor water infrastructure countries but also in the rich countries like Australia, Italy, Spain and America.

Locating problems of sweet water shortage broadly leads to three things - population, prosperity and climate change. We do not know the projection of water use in future for agriculture that now withdraws 70 per cent of water for irrigation. The populous world has a high demand for food production, so water for agriculture is a big concern. Poverty eradication is a much talked about issue. But is the way of poverty eradication environment friendly?

Scientists claim that Hurricane Florence in the east of America and Super Typhoon Mangkhut in East Asia are the impact of greenhouse gases, warming oceans and changing climates. The warm ocean water hits glaciers which melts and increases sea level at a rate of 3mm a year. Higher seas bring storm surges that reach farther inland.

The world’s water endowment is now imbalanced because of some countries’ unwarranted intervention. If we see China and India where 36 per cent of total world population live, they withdraw huge amount of fresh water for crop cultivation and industrial production.

Last October the Intergovernmental Panel on Climate Change published a report comparing impact between temperature and water. If temperature rises 20 C, 8 per cent of world population will be exposed to new or aggravated water scarcity in 2050. If it rises 1.50 C, 4 per cent population will suffer in 2050.

How can we save water for our next generation? Many dignitaries say they need money and technology to save water. We disagree with these opinions, as mostly bad water management is the main cause of sweet water shortage. We can learn from Israel and India respectively how one country is the best and another is the worst example of water management.

In Bangladesh, people have high demand of fresh water for drinking, cooking, bathing and washing. Already acute water shortage is pushing people to internal migration. Our rivers were used for transportation, producing huge amount of fishes, irrigating crops cultivation, etc. But nowadays rivers are becoming part of history for the next generation. Century long professional people are losing job due to failing of total eco system. We need to respond to save water at each level. We can stop unnecessary water use in bathing, washing, etc., and recycle water for plants. Rainwater can be harvested for domestic and agriculture purposes.

Economic data provides proof of wealth in the country, nonetheless climate change and other manmade causes are destroying natural resources and part of the nation is still living in extreme poverty. This is most prevalent in the coastal and hilly areas where the people have severe scarcity of water and have to venture far from home for sourcing water on a daily basis. A recent survey revealed that lack of safe water is one of the main reasons of discomfort in conjugal life in Bangladesh rural communities. Collecting water from far away sources is one of the main causes of sexual harassment for female and girls’ dropping out of school.

Contaminated water and poor sanitation are linked to transmission of diseases such as cholera, diarrhoea, dysentery, hepatitis A, typhoid and polio. Inadequate or inappropriately managed water and sanitation exposes individuals to health risks that can be prevented easily.

Bangladesh is blessed to have plenty of rain every year. Annual rainfall of the country is about 1,600 mm in the dry northern parts while most parts of the country receive at least 2,000 mm. If we manage our water resources properly, we may have safe drinking water for all.