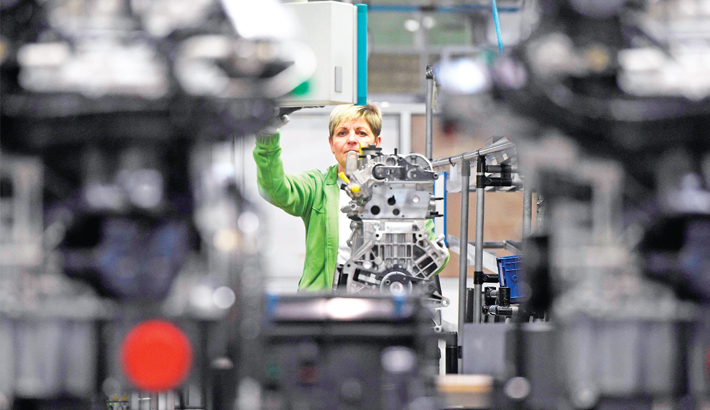 An employee adjusts an engine on the assembly line of Czech carmaker Skoda Auto at Mlada Boleslav in Czech Republic recently. Once the butt of jokes, Czech-made Skoda cars have won over Brits, but the UK's looming exit from the European Union could deal a heavy blow to the brand and the entire Czech economy.

MLADA BOLESLAV: Once the butt of jokes, Czech-made Skoda cars have won over Brits, but the UK’s looming exit from the European Union could deal a heavy blow to the brand and the entire Czech economy.

British lawmakers voted to postpone Brexit from March 29 to at least June, but a no-deal hard Brexit that would slap high tariffs on imports like cars is still possible.

Controlled by Volkswagen since 1991, Skoda exports some 80,000 cars to Britain a year, almost 10 percent of its annual output.

In an e-mailed statement, Skoda told AFP it was “worried and getting ready for all scenarios” and called for a “solution acceptable for all parties”, but declined to elaborate.

Radek Spicar, vice-president of the Czech Confederation of Industry, went further, warning that the company might suffer a heavy blow.

“A hard Brexit would mean 10-percent import duties slapped on cars, and that would hurt,” he told AFP.

“It would stifle demand for cars. Companies like Skoda wouldn’t collapse, but they would lose part of an important market,” Spicar added.

“Besides, Britain is a symbolic market for Skoda — it has come a long way from being the butt of jokes to one of the most respected makes.”

“How do you double the value of a Skoda? Fill the tank with petrol,” went a popular joke about Skoda’s clunky models produced in the 1980s when Czechoslovakia — the predecessor of the Czech Republic and Slovakia — was still communist.

“Do you know why Skoda has heated rear windows? So when you’re pushing it home in the winter, your hands stay warm,” said another.

But Britons gradually melted — Skoda’s Fabia model was named the car of the year by What Car? magazine in 2000, while the Skoda Yeti became the best car to own in a 2013 poll of 46,000 British drivers conducted by the Auto Express magazine.

“Nobody is ashamed of driving a Skoda now, Jeremy Clarkson praised it in Top Gear, it is driven by taxi drivers,” said Spicar.