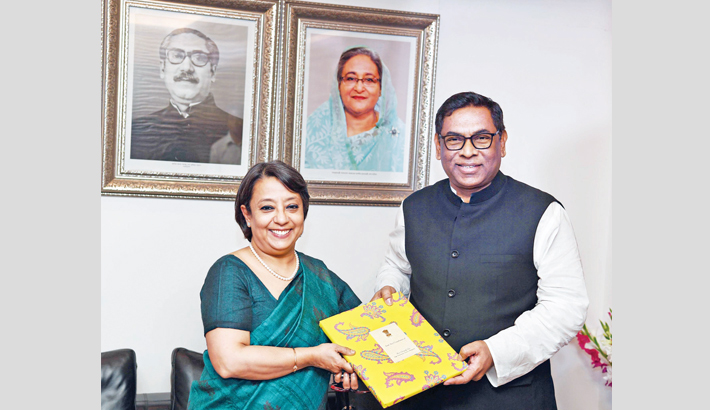 State Minister for Power, Energy and Mineral Resources Nasrul Hamid presents a souvenir to Indian High Commissioner in Dhaka Riva Ganguly Das during her visit to the former’s Secretariat office in the capital on Wednesday.

Bangladesh and India have expressed their satisfaction over existing multifaceted bilateral cooperation, especially on power and energy sector.

The newly appointed Indian high commissioner to Bangladesh Riva Ganguly Das expressed the view when she made a courtesy call with State Minister for Power and Energy Nasrul Hamid at his Secretariat Office on Wednesday.

During the meeting, Riva Ganguly expressed her satisfaction over the bilateral relations and sought cooperation for gearing up the undergoing state to state projects in power and other private sectors in Bangladesh.

She said that Indian private sectors are now interested to invest more in power and energy sector in Bangladesh. The Indian Reliance Group, Adani Group and Shapoorji Pallonji Group have already invested in Bangladesh power sector. Besides, Indian Oil and several other firms invested in energy sector.