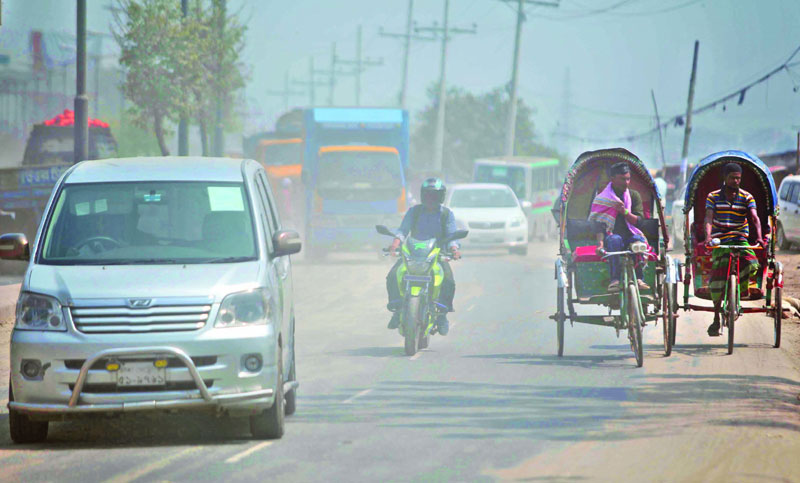 Vehicles run on a road amid a cloud of dust in the capital’s Aminbazar area on Thursday. City people are facing health risk for dust pollution. — sun photo

Until the monsoon season arrives, Dhaka residents will have to live with increasing dust pollution as the authorities have apparently given a blind eye to pollution management as in many other countries.

The pollution is also blamed for economic losses in terms of medical treatment and more imports of medicines which are not available in Bangladesh.

Monsoon rains gives the residents some comfort with cooler air and cleaning of the polluted air containing mainly dust along with fumes from vehicles despite laws.

Professor Abdus Salam and the Chief Scientific Officer of the Atomic Energy Centre Shafiur Rahman in their 2017 research report warned that there was a heavy metal presence in all 88 areas of the capital. Among them, the heaviest metal (Cadmium, Lead, Nickel, Arsenic, Copper and chromium) has been identified in the GPO area.

The amount of cadmium in the dust of the General Post Office, Bangabhaban and Rampura TV stations

In addition to public livelihood, health, financial and environmental damage are caused by dust polution.

The city is undergoing massive modernisation plans which has been welcomed by the residents, but lack of pollution management was the key to this problem that was crippling Dhaka life, experts said.

Sources said that not only dust from digging soil, but sand, cement, stone and concrete which were kept on the road side are blamed for the increasing pollution.

Those making constructing multi-stories office complexes or home, ignore the difficulties residents suffer or laws that forbid such activities.

Many wear mask covering their nose and mouth as a protection against dust.

According to the doctors, due to dust, children and adults suffer from respiratory diseases. More than 40 percent of the patients who come to the children’s health department are admitted with various respiratory disorders.

Nur-e-Alam, a private employee, who works in the city’s Motijheel from Mirpur, said there is no end of traffic congestion on the road. Now another problem is dust. Not only in Mirpur but also in the whole capital is full of dust due to various development work.

He said “It is impossible to walk on the street without mask. Layer of dust was found in the face, clothes and hair while reached home. A white shirt can’t be used twice due to dust. There are also various health hazards.”

“Due to dust, people cannot eat at the tea stalls and restaurants at the hotel here” he added.

Professor Abdus Salam and the Chief Scientific Officer of the Atomic Energy Centre Shafiur Rahman in their joint research on heavy metals in Dhaka, collected dust sample from the roads, sidewalks, sewage soil and holes in 88 areas of 22 roads in the capital. The areas are selected on the basis of randomization. The collected samples from these areas were then analysed at the Atomic Energy Centre’s laboratory.

When contacted, Dr. Ashis Kumar Chakraborty, Managing Director of Universal Medical College and Hospital Ltd, told daily sun “Children and elderly people living in the capital are most affected due to dust pollution.”

“Children suffer from Bronchiolitis, pneumonia, dust allergy and some others dieses due to huge dust in the capital” he said. He also said “On the other hand, adults suffer from chronic obstructive pulmonary disease (COPD), acute exacerbation of bronchial asthma, respiratory failure and others disease.”

A DoE study of 2016 shows the dust pollution in Dhaka city turns acute during the dry season, which is over three times higher than the permissible level.

According to the study report, the level of particulate matter (PM-10), commonly known as dust, was the highest 499 ugm/m3 in the last dry season in Dhaka, while the permissible level is 150 ugm/m3 as set in the Environment Conservation Rules 1997.

The DoE with support from the Norwegian Institute for Air Research (NIAR) conducted a study in Dhaka city last year (2016) to assess the level of air pollution and define the sources of the pollution to take effective measures to check it.

The study findings reveal that the major sources of dust pollution are brick kilns (58 percent) located in surrounding areas of the city, construction materials (18 percent) and vehicles (10 percent).

He said the soil, sand, bricks and other construction materials are left in the road-pavement during the construction work. Besides, breaking old buildings, broken bricks in the machine- these are the main sources of dust pollution.

Many city people are suffering from various diseases like cough, cold, bronchitis, respiratory problems, allergy, nausea and skin diseases due to presence of harmful elements in the air, he added.

He urged the government to take necessary steps to help reduce the extent of dust in the air.