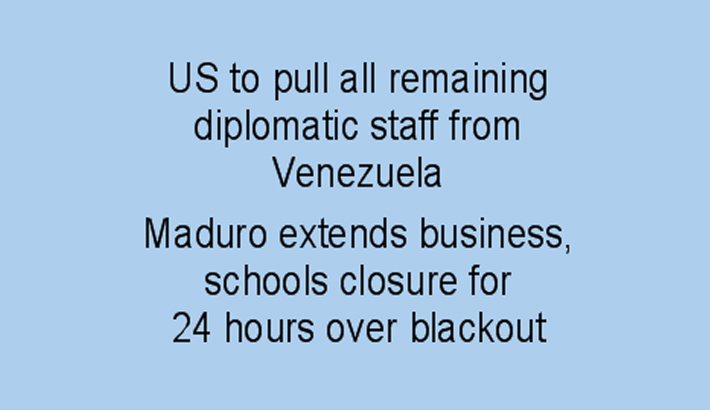 Meanwhile, the United States will withdraw all remaining diplomatic personnel from its embassy in Caracas as the crisis in Venezuela deepens, Secretary of State Mike Pompeo said late Monday.

The move worsens already tattered relations, with President Donald Trump having said he rules out no options including military intervention to oust President Nicolas Maduro as Washington monitors rapidly unfolding events in the oil-rich but crippled South American nation supported by Russia and China.

The US has already imposed sanctions designed to choke off Venezuelan oil sales, the lifeblood of the leftist government in Caracas.

Much of Venezuela has been without electricity for going on five days now due to a power outage that the government blames on what it calls sabotage encouraged by the US. Venezuela is in the grips of an acute economic crisis that has fueled the rise of opposition leader Juan Guaido, the national assembly speaker who in late January declared himself to be the interim leader. More than 50 countries led by the US have endorsed him.

“This decision reflects the deteriorating situation in #Venezuela as well as the conclusion that the presence of US diplomatic staff at the embassy has become a constraint on US policy,” Pompeo wrote on Twitter.

On January 24 the State Department ordered all non-emergency government employees to depart Venezuela and urged Americans living in the country to consider leaving. Earlier Monday Pompeo took aim at Cuba and Russia for their support of Maduro.

On the other hand, Venezuela President Nicolas Maduro extended the closure of shools and businesses for another 24 hours on Monday due to the ongoing electricity blackout, Communications Minister Jorge Rodriguez said.

It’s the second time Maduro has prolonged the closure, which was first announced after the massive power cut hit late on Thursday afternoon.