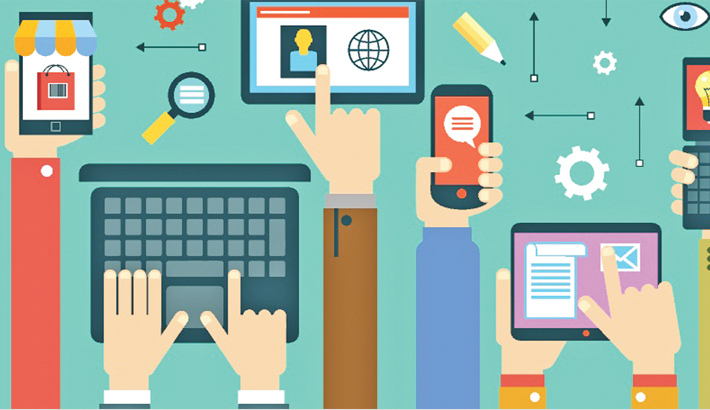 Bangladesh has never seen such tremendous growth in any other issues than internet penetration in last one decade due rapid infrastructural development in communication technology.

In 2009, the figure was only 0.4 million, which stands now nearly 90 million in spans of time. The word Internet seems a household word now days. 80.47, million people are connected to internet through mobile phone, rest people are using broadband and WiMAX.

Bangladesh is now the 5th largest internet using country in Asia. Have we ever thought that how these people are using internet? Internet is not just a protocol of connecting computers and devices, it has become a a critical issue for so many nations.

We just can not be happy to know that our people are using internet. Internet has both negative and positives sides for both the society and its people.

Just imagine a situation, most of internet users are highly addicted to social networking sites, children are getting access to adult contents, immature youths become demotivated  by self-claimed internet influencers, country is devastated with fake and fabricated news, no censorship over internet contents!

These issues are pretty enough to traumatize our brains how much risk we are absorbing together.

In Bangladesh, most of the parents are not that aware of their children who use internet. Internet is deep sea of contents, where most of the contents might have severe negative effect on children’s psychology, personality and education.

Children can accidentally come across negative contents if their parents are reluctant in surveillances. In a recent survey among 2200 students, it was seen that two-third of them do have access to internet devices. Adolescents have access to different internet applications.

Children may not have that much emotional intelligence to figure out which sites, contents; videos are fairly perfect for them. If you just open your Facebook right now, you would see that some people are busy in spreading hate speeches, regardless to social, political, religious issues.

They love to make it viral even though there’s no reference. Suppose, someone could not like someone’s activities, he starts writing bad things about him. Social Networking sites are already powerful than that of conventional media. Now, question is how much maturity we do hold to keep this as a strong public media.

Just because we do not posses that much emotional maturity, less-deserving people are becoming public faces and they start influencing people in wrong ways.

If a model gets some followers on his social media sites, he/she starts behaving like a superstar even before learning his/her field completely. If someone gets some endorsement over social media, he/she starts making specialist comments even without having proper background.

Fake news is everywhere on internet in Bangladesh. Undereducated and sensitive people are highly influenced by fake’s news. People should have minimum level of education before having access to news links.

In Brahmanbaria, a group of villagers got into blood-shedding clash just because of some fakes religiously sensitive news.

Anyone who has used internet in Bangladesh might have experienced that internet is a heaven for cyber-bullying. We never get late in bullying our cricketers, politicians, media actors, even our mass people on small issues.

Before making any statement, we never take time to verify the news sources. Girls also experience bulling on social media through sexually-assaulting comments, unauthorized replication of photos, unwanted bothering. Ultimately the internet space yet to become safer for all.

In Bangladesh, internet is not only a communication protocol, it has already become a disturbance for so many individuals who work for different organizations.

In developed world, it is a crime to communicate workers after office time by using internet. But some management people have made it a common practice to knock their staffs ever after office time.

Maintaining office tasks after office time is becoming a dangerous trend in all over Bangladesh, just because internet made the communication process easy and cheap.  It is breaching the peace of personal life beyond office boundary. We just became educated, but ethics of using internet is still a mare dream.

In Bangladesh, average screen time on internet is pretty higher. Advertisers and marketers are using it as an advantage. Internet is making people to buy unnecessary things we don’t need actually. We just can not come out of traps of internet-based advertisers.

Bangladesh is now in a situation, where it has become obvious to bring the internet users in light. Internet has it is easy to express ourselves but it is necessary to know what are the right ways and right places.

Nahid urged the government to formulate guideline for safer issue of internet for youth.

“Youth should be motivated to deal with positive and learn-worthy internet contents. There are some complexities in internet-governance. Government might need heavy investments in bringing total internet ecosystem in a sound shape. But progressive people do have some responsibilities in making people aware of the right usage of internet. We should start influencing our surroundings for the safe internet,” Nahind explained.

Developed world is already taken initiatives to make their internet safe for all to have more positive impacts to the society. As a 5th largest internet using country, when wills start educating our internet users?

Mohammad Anisul Islam is a marketing and technology enthusiast. He works at ACI Logistics (Shwapno). He can be reached at [email protected]