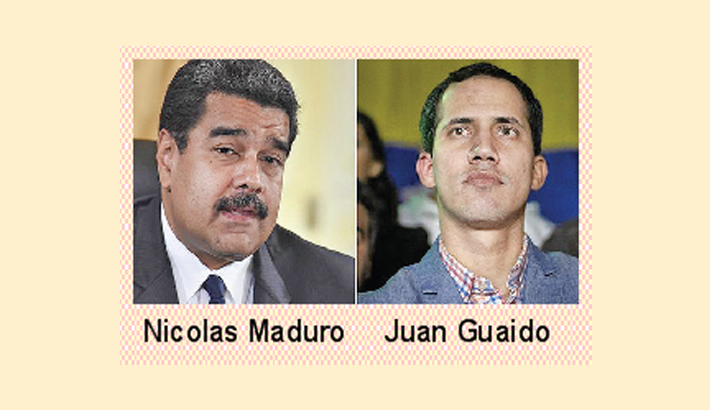 European countries “should strengthen financial sanctions against the regime. The international community must prevent Venezuelan money from being misused to kill opponents of the regime and indigenous peoples,” Guaido said in an interview with the German news weekly Der Spiegel.

Guaido, who declared himself interim president in January, strongly condemned the decision by President Maduro to expel the German ambassador to Caracas, and urged the envoy to “remain” in Venezuela.

“Venezuela lives under a dictatorship, and this way of proceeding is a threat to Germany,” Guaido said.

“Maduro holds the presidency illegally. It is not legitimate to declare an ambassador undesirable,” he added, thanking Germany for humanitarian aid it has provided.

“The regime not only threatens the ambassador verbally, his physical integrity is also threatened.”

Kriener was among more than a dozen foreign representatives to welcome Guaido at Caracas airport on his return to the country on Monday—but so far the only one deemed “persona non grata.”

Meanwhile, Venezuela expelled Germany’s ambassador Wednesday, hitting out at international support for opposition leader Juan Guaido as the US stepped up sanctions in a bid to force out his rival President Nicolas Maduro, reports AFP.

Separately, an American journalist was detained by Venezuelan security services for some 12 hours and due to be deported, in an incident condemned by advocacy groups as an attack on free speech.

The foreign ministry gave German envoy Daniel Kriener 48 hours to leave for “interference” in Venezuela’s internal affairs. He had greeted Guaido at Caracas airport on his return to the country on Monday.