For 3rd Test or IPL? 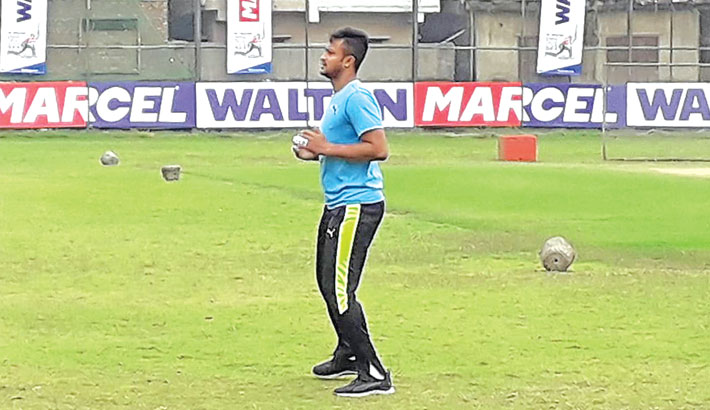 Bangladesh ace all-rounder Shakib Al Hasan warms up ahead of a practice session at Bangladesh Cricket Board Academy Ground in the capital on Tuesday. -SUN PHOTO

Bangladesh Test and T20 captain Shakib Al Hasan returned back to training session on Tuesday after a long while due to injury which he sustained during the final of Bangladesh Premier League (BPL).

The talismanic all-rounder returned home after an extended vacation this week as he was ruled out of the three-match ODI series against New Zealand and the following two Tests due to the finger injury during BPL final between Dhaka Dynamites and Comilla Victorians as he copped a blow from Thisara Perera while batting and suffered a fracture.

Whether he will be available for the third Test is yet not determined but his return back to the field only indicates his personal urgency to get back to the cricket ground.

Shakib underwent an X-ray scan on Monday and the report suggested that he will need another week before removing the bandage from his finger. The bandage is supposed to be removed on March 12 and on usual circumstances it will take more than a week for him to get totally fit for cricket.

Despite the bandage on his injured finger on the left-hand, he spent half-an hour in the gymnasium with the BCB physio while having to cut short his running session at the academy premises due to unexpected rain.

“He will do physical training for the next one week and later we will decide on our next course of action,” said Morshed.

“He is expected to run while there will be gym session. Everything will organised to increase his strength and stability,” he added.

“I cannot say whether he can play or not but it is very unlikely that he will start his skill training before a week,” he added.

Meanwhile, Bangladesh Cricket Board President Nazmul Hassan said that Shakib will be handed permission to play in the Indian Premier League (IPL), scheduled from March 23, only if he can earn medical clearance.

BCB President also informed that Shakib underwent a test and would need seven more days of rest before starting any cricketing activities. He added that it was more important for Shakib to gain complete fitness before hurrying to play matches.

“What I heard is that he underwent a test yesterday and he was prescribed further seven days of rest. So that’ the main thing. I don’t think it’s absolutely necessary for him to play the third Test because the World Cup is coming up,” Nazmul said.

“If he has a problem then we want him to recover fully before returning to cricket. We don’t want to take any risks with him,” he added.

BCB president further stated that Shakib will need to be fit to play in the IPL.

“If he is not fully fit then how will he play IPL? It can’t be that he is unfit for our national team but fit for the IPL. If he is fully ok and doctors say so then he will be able to play in IPL,” said Nazmul.

“We want him to play in both IPL and for the national team so everything depends on his health,” he concluded.