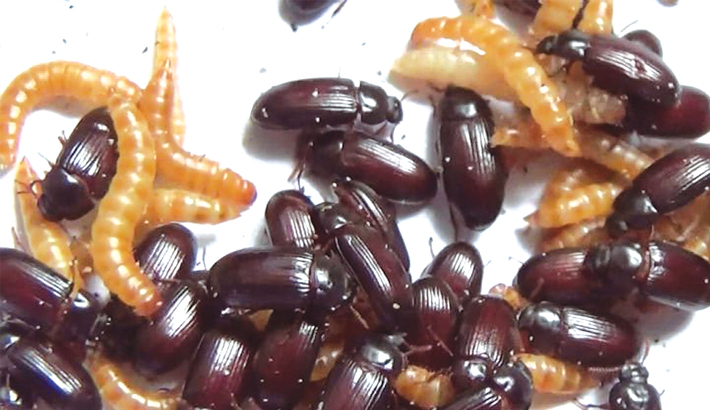 A California woman swallows about five live Chinese weevils every day as a way to prevent the growth of cancerous tumors and boost her immune system.

Marcela Iglesias, a mother-of three from Los Angeles, California, believes that consuming live Chinese Weevils every day could be the best way to prevent cancer, treat chronic pain, arthritis and various digestive problems. Swallowing them alive is critical as these bugs allegedly release a toxin called “coleotoxin” when they die, and you want that to happen when they reach your digestive system. This theory is supported by a 2011 study which found that coleotoxin reduced tumor cell growth by more than 70 per cent. That research is heavily contested by many in the scientific community, but Iglesias doesn’t really care, saying that even if the bugs don’t actually help prevent cancer, they are still a great source of protein.

The Argentine-born woman who moved to California 20 years ago breeds Chinese weevils in her living room and claims that they are very low maintenance. They live in a small container, and all she has to do is replace their pieces of bread, wheat and the lettuce they get water from every once in a while. They breed like crazy, so she always has an abundant supply to consume.

Iglesias says she learned about the benefits of swallowing live weevils from a close friend who had been battling terminal cancer. After beating it once, the man was given just a few months to live with chemotherapy, but he refused the treatment because it made him feel terrible. Instead, he started consuming about 40-50 live Chinese weevils every day, and he’s been cancer free for for six years. Marcela swallows a much smaller dose because she is not suffering from any illness, so she doesn’t need to consume too many.

Even though Marcela admits that many of her friends find her weevil-swallowing habit disgusting, she claims that she’s not grossed out at all, even when the bugs are crawling all over her tongue. They don’t taste like anything, and she just washes them down with a glass of water of celery juice.

“The bugs have a lot of health benefits, not only for potentially curing cancer but arthritis, chronic pain, digestive issues and more – in Asia it is very popular to eat bugs,” Marcela Iglesias told Storytrender. “In my eyes it’s a win-win situation, for me I take them to see if my body will feel any different. The worst-case scenario is that they don’t do anything and it’s all a lie, but at least I’m consuming protein from them as I do not consume animal protein.”

Marcela only started consuming live Chinese weevils two months ago, so it’s too early for her to say if they actually work, but says other people online swear by them. She also considers her bizarre eating habit less disgusting than eating meat. The bugs are easier to digest, contain lots of protein and you don’t have to worry about the ethical aspects, like how the animal was mistreated or how it suffered when sacrificed.

Consuming weevils for health benefits has been very popular in Iglesias’ home country of Argentina, as well as several other South American countries for years, and you can actually find a lot of articles and videos on their alleged benefits online. However, scientific studies are yet to conclusively confirm these claims.