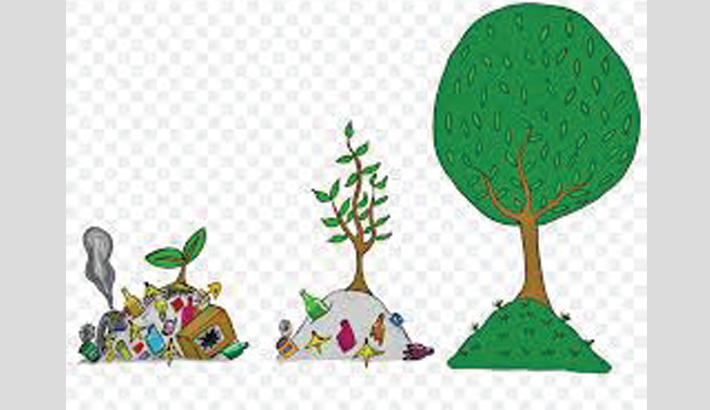 The winter has already packed up for this year. In the meantime I was peeping through the past periods when I used to be a restless child who was fond of playing hide and seek and other amazing games with my highly obstinate mates. This took me suddenly to a nostalgic memory of a winter morning which was 10 to 12 years ago. I was playing badminton in chilly weather. This brought a conflicting thought to my mind that Dhaka city hadn’t experienced less than 10 degree Celsius in any winter.

Such an idea made me upset that we are forgetting we are part of nature too. We are nothing but just another offspring of Mother Nature. The climate is becoming continuously alarming. Bangladesh is known worldwide as the country of six seasons but such an idea is breaking down.

The fatal changes in the weather pattern are visible to inhabitants as we suffered heat up to 43 degrees last summer and now a low range of winter. A 2014 study by the research institute of International University of Japan analysed all possible pairs of successive seasons in the Bangla calendar and found that two were merging or at least had become indistinguishable from each other.

We can focus on a lot of problems created by ourselves but more focus should be on the indiscriminate industrialisation without due attention to environment. It’s giving priority to profit over preservation of nature. Bangladesh economy had its root in agriculture, but today its place is growing as an industrialised country whose clothes, medicines and raw materials are being exported to numerous countries. Though industries help us earn huge export remittances for the economy but going against nature can turn the tide in the long run.

Right now there are about 5,000 garments factories in the country. Two adjacent districts of the capital, Narayanganj and Gazipur have turned into industrial storehouses, especially RMG ones. Environmental damage usually trails behind rapid industrialisation in developing countries but Bangladesh is already one of the world’s most environmentally fragile places, having dense population and low lying wetlands. According to the greenhouse theory the low-lying wetlands attract the carbon and other synthetic chemicals which turn out to be very poisonous for air and lungs. We have high level of humidity in our air which keeps the particles logged in.

This indicates that Bangladesh is not just taking in its own waste but also consuming wastes from other neighbours too. The average temperature in Bangladesh was 24.5 degree Celsius to 25.5 degrees during 1958-1977. It rose to 26.5 degrees by 2015. The beckoning of free market economy and Bangladesh’s performance trial to be an industrial giant is making the environment more vulnerable. The waterways are getting intoxicated. Density of ‘lead’ in air of Dhaka city in dry season reaches 463 nanograms.

Bangladesh has laws to protect the environment, a national environment ministry and special courts for dealing with environmental issues. Yet pollution is rising instead of falling. Foreign buyers who are dependent on our products rarely pay any attention to the environmental degradation of the manufacturing country. Bangladeshi environmentalists say global buyers have done far too little to preserve the environment. Green industry policy should be practised effectively to lessen this hazard and save our environment for a better living.