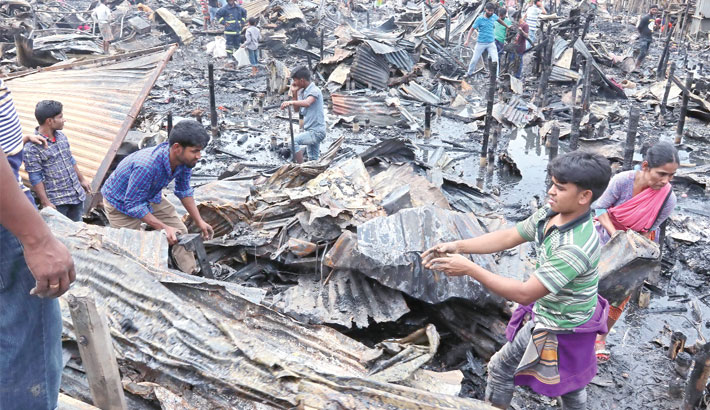 People are removing remains after a devastating fire destroyed their shanties in a slum behind CRP Hospital in Mirpur-14 in the capital early Thursday. -SUN Photo

The carelessly thrown blazing cigar filters, its butts and flared-up firecrackers contributed to 15.2 percent of the total fire incidents across the country last year, according to Fire Service and Civil Defence (FSCD).

The FSCD thinks such fire-related accidents take place due mainly to lack of awareness among people.

On January 14 in the current year, a fire gutted about 3,500 books of Class VIII and IX in the storehouse of Bogura Zila School.

There was no electric line in the storehouse. The Fire Service and Civil Defence launched an investigation into the incident and found that the live cigarette filter caused the fire.

As per the firemen, somebody threw the blazing cigarette filter in the storehouse through the open window.

On December 16, 2018, the fire caught a wooden mill at Mainimokh Bazar in Langadu of Rangamati gutting wood worth about Tk1 crore.

After a few days of the incident on December 22, another fire broke out in two betel leaf fields at Keshabpur in Jashore burning about 33 percent of the field.

An FSCD investigation found that the fire originated from the cigarette butts.

Of them, 3,108 occurred due to blazing cigarette filters, which accounts for 15 percent of the total fire incidents.

The fire from cigars damaged properties and valuables worth Tk55,38,33,295.

The FSCD recovered properties and valuables from the fire was worth Tk132,86,05,275.

A total of 42 fires broke out from firecrackers, which account for 0.2 percent of the total fire incidents last year that damaged properties and valuables worth Tk56,06,700.

The firemen recovered the properties and valuables worth Tk123,11,400.

Contacted, Brigadier General Ali Ahmed Khan, director general of Fire Service and Civil Defence, said the lack of awareness as well as the callous attitude of people is largely responsible for fire incidents that are putting human life at risk and damaging properties worth crores of taka every year.

He suggested putting out cigar ends first before they are thrown away.