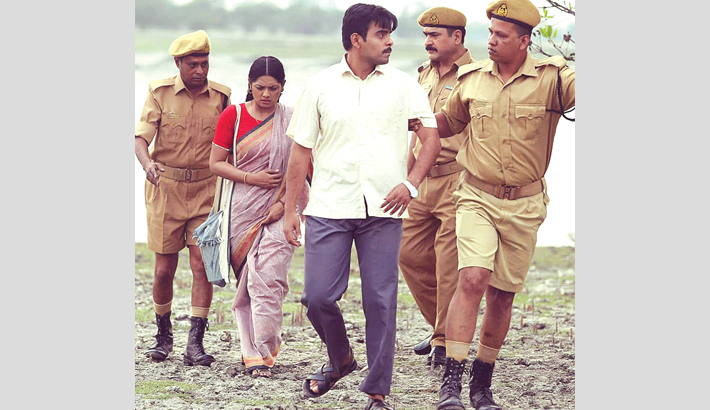 Whenever history is brought to life on screen (whether in documentary or feature film) directors face tough challenges. Apart from finding accurate locations and managing proper costumes and other materials they need to remain careful about the perfect projection of the history as even a minimum flaw can ruin their efforts and force them to undergo harsh criticism. Yet the movie directors take this risk as they know that when they make an appropriate periodical film they are splashed by the shower of praise of the critics and viewers. But the film directors of Bangladesh may have different thoughts and experiences as despite having some of the unique incidents of the world history in our journey as a nation not many of them have endeavoured to film them. For example, the glorious Language Movement and the great sacrifice of our brave language martyrs in 1952 is a unique incident in the global history. But being the only nation of the world to have sacrificed lives for establishing the honour of mother tongue, our directors haven’t succeeded in spreading this pride through films. It may sound astonishing but the reality is that not a single movie based on the Language Movement was made in the last 67 years! Tauquir Ahmed and his team deserve due respect and gratitude in this regard as they have finally made a breakthrough and come up with a movie based on the historic Language Movement.

Director Tauquir Ahmed and producer Impress Telefilm Limited have created a history by releasing the first Language Movement based film ‘Fagun Haway’ on February 15. Spoiler alert - the storyline of the movie can be stated briefly. In a winter day of December 1951 or January 1952, a West Pakistani police officer Jamshed Ali Khan arrives at Khulna’s Chandranagar Police Station. It is a punishment posting for him. The same day a third-year Dhaka University student Nasir and a first-year Dhaka Medical College student Dipti come to their locality to spend their vacation. They join a local theatre group to perform in a stage play. Despite their religious differences gradually a romantic relationship develops between them. Suddenly crazy officer-in-charge Jamshed announces that all the people of Chandranagar will have to learn Urdu and speak in Urdu. The rest of the film revolves around the story that how spirited Nasir, Dipti and their fellow activists protest Jamshed’s decision and stand for establishing the honour of their mother tongue.

‘Fagun Haway’ is inspired from Tito Rahman’s short story ‘Bou Kotha Kou’ but it seems that this time Tauquir Ahmed has taken more freedom unlike his previous historical film ‘Joyjatra’, which was an adaptation of Amjad Hossain’s Liberation War based novel ‘Obelay Oshomoy’. The original story was set in Old Dhaka. Tauquir knew that recreating 1952’s old town would be a gigantic and expensive task. Thus he has shifted the setting intelligently to a village of Khulna region. There is neither historical figure like Salam, Barkat, Rafiq, Jabbar nor Jinnah, Liaquat, Nazimuddin in the film but certainly its characters and story are shadowed by their invisible presence and influence.

Tauquir’s script correctly echoes the Muslim League dominated politics and rising communalism in the then East Pakistan. His dialogues have reflected personal as well as social psyche of that period. For example, when the tea stall owner asks maulana that why you are speaking in Urdu these days, maulana replies that Urdu is the language of Muslims. Then the tea stall owner meaningfully asks - when have you found the religion of a language?

While preparing script Tauquir not only has changed the name of the police officer but also has infused the character with a few new characteristics. In the original story Aziz learns Bangla from his colleague so that he can easily ask for bribe from the local people but in the film Jamshed hates anything related to Bangla language. Signboards written in Bangla, the mass Bangalis and even a mere bird humming ‘Bou Kotha Kou’ annoy him. Thus he makes everyone bound to learn Urdu. He asks a baul to sing an Urdu song but when the baul sings a Lalon’s song on secularism, he shaves his head and humiliates him before all. Jamshed wants to spread his influence abusing power and this aggressive nature of power destroys everything. 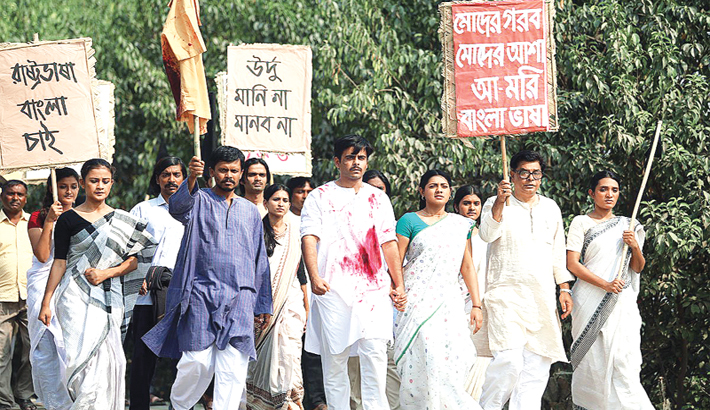 Tauquir has used symbolism in some of the crucial scenes of ‘Fagun Haway’. In the first scene of the film when Nasir asks Dipti about the benefit of keeping a wild bird imprisoned in a cage, it indicates to the situation of freedom-loving Bangalis in East Pakistan. Tauquir’s parallel projection of British police’s rape attempt on the stage of ‘Nil Darpan’ and Pakistan police’s rape of dumb girl in the police quarter reveals that though the rulers have changed, their attitude towards Bangalis remains the same. Besides, Tauquir’s capture of a pregnant goat and the pregnant girl Jhumur in the same frame in a wide angle shot engulfs audiences’ hearts with deep feeling of sadness.

‘Fagun Haway’ cannot be considered only as a serious film regarding 1952’s Language Movement as there are a plenty of entertaining elements embedded in it. Apart from the romantic and family drama sequences, Tauquir amuses his audiences with a number of comedy scenes. His superb use of humour doesn’t allow the audiences to feel bored even for a minute. Especially police’s chase for Manju and maulana’s expression of helplessness through different dialogues amaze the audiences. Besides, when Jamshed drinks urine in place of alcohol or dubs chickens as Jinnah, Liaquat, Nazimuddin, Iqbal and teaches a bird to tell ‘bibi bath karo’ instead of ‘bou kotha kou’, the viewers burst into laughter.

The most fascinating aspect of ‘Fagun Haway’ is the powerful performances of its actors. Yashpal Sharma gets maximum screen time in the movie and he has used it in the best possible way. Right from the beginning through his appearances as a grumpy cop Jamshed he has irritated the audiences. The combination of his determined voice and expressions in his introductory speech in the police station compound truly terrifies them. Throughout the movie Yashpal has perfectly justified Tauquir’s decision of casting him. In the character of Nasir, Siam Ahmed hasn’t disheartened his viewers. He has adopted the courage of an agitated youth and charm of a beloved with equal expertise. His sincere effort has proved that why he is considered as one of the most promising young actors of the industry. As always Nusrat Imrose Tisha has also amazed all with her natural acting while playing the role of Dipti. Her calm-yet-confident appearance has perfectly reminded the viewers of the women of fifties. Whether it is in a big role or in a short one Fazlur Rahman Babu always does justice to the character. This genius actor has proved this again while performing in the role of sweeper Chandar in ‘Fagun Haway’. Seasoned actor Abul Hayat as physician Nikhil, Shahidul Alam Sachchu as Muslim League leader Ajmat and Rawnak Hasan as Muslim League activist Obayed seem to be quite reliable. With their performances in the role of Manju and maulana, Sazu Khadem and Faruque Ahmed have won the hearts of the audiences. In the mid of all the star actors Sabrina Tonni has made her own mark while playing the character of hapless dumb girl Jhumur. Even in the short roles Afroza Banu as Nasir’s mother, Naresh Bhuiyan as tea stall owner, Niaz Mohammad Tarique as theatre activist and Azad Shetu, Kallal Chowdhury and Syed Mosharof as police personnel have done a splendid job.

Reliability is the most important factor for any periodical film. Tauquir Ahmed has maintained that periodic authenticity successfully despite minimal exceptions. The launch used in the beginning looks too bright and modern slabs beside the road seem clear in the top shot before the last scene though the use of volkswagen car in the whole film has complemented the setting perfectly. Besides, cinematographer Enamul Haq Sohel has avoided train and big roads and skipped electric line and mobile phone tower consciously. His wide angle shots and top shots from drone camera have fascinated all. Be it creating police station compound, Muslim League leader Ajmat’s house, Nasir’s home, sweeper Chandar’s house, maulana’s home, local college campus, tea stall, rural roads, river bank or Jamshed’s room, art director Ranjan Rabbani has proved his efficiency everywhere though the interior of Dr. Nikhil’s house sometimes looks inappropriate in consideration of the then period. Costume designer Shajia Afrin has done a tremendous work. Starting from the dresses of all the characters to the logo of East Pakistan police in the cap and metal epaulette on the shoulder, she has concentrated on every detail. ‘Fagun Haway’ DI colourist Koushik Roy, editor Amit Debnath and sound designer Ripon Nath deserve appreciation for keeping their reputation intact with their fabulous works. Music director duo Pinto Ghosh and Rokon Emon have enthralled the viewers with their mastery as they have provided a soothing experiences through their music. Each of the six songs used in the movie has complemented its storyline.

Making a 136-minute film on the great Language Movement within a limited budget and shooting schedule of only 22 days is certainly a huge challenging task. Tauquir Ahmed has taken this challenge and despite a few loopholes he has created a marvelous work of art. ‘Fagun Haway’ is all about an outstanding historic journey that takes the viewers through a mixture of emotions. While watching this beautiful movie one can burst into laugh, feel the charm of love, get angry and stand steadily to fight against injustice. Unfortunately our movie-goers haven’t learned to appreciate quality movies yet. The poor audience turnout and dramatic decrease in the number of halls for this exceptional periodical film have proved this bitter truth again.