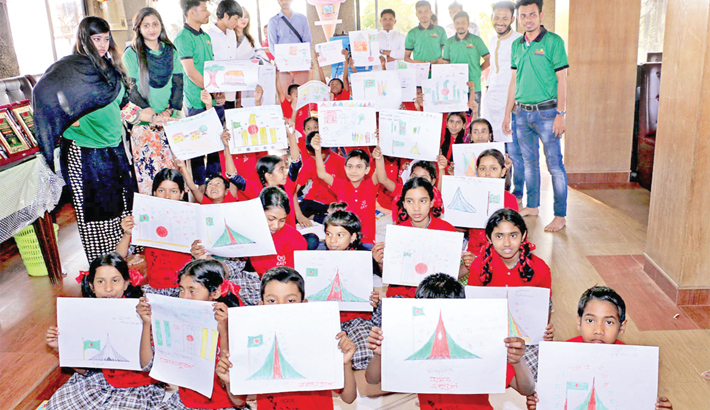 Underprivileged children pose for a photograph holding their paintings after a painting competition organised by Hotel Safina Limited in the city on Thursday. — sun photo

Hotel Safina Limited, a renowned hotel in the port city, organised a drawing and recitation competition for underprivileged children on the occasion of ‘Amar Ekushey and International Mother Language Day’ in the city on Thursday.

A total of 40 underprivileged children from different areas of the city attended the competition organised with the help of social organisation ‘Smile Bangladesh’ on rooftop of the hotel.

The children attended different activities including painting and recitation of rhymes on the day.

One of the children identified as Jui said she has been living with her parents at a slum in the city’s Dewanhat area.

Expressing her joy after attending the programme, she said she never got such chance to draw picture of Shaheed Minar earlier.

The hotel Managing Director (MD) Shihab Sagir said they organised the programme for the underprivileged children to make them happy on the occasion of the ‘International Mother Language Day.’

“Though we developed facilities for all citizens, many children in society have been deprived of them,” he said.

Smile Bangladesh Member Nazrul Islam said they have been working to educate the street-children in different areas of the city.