Let us not unlearn lessons! 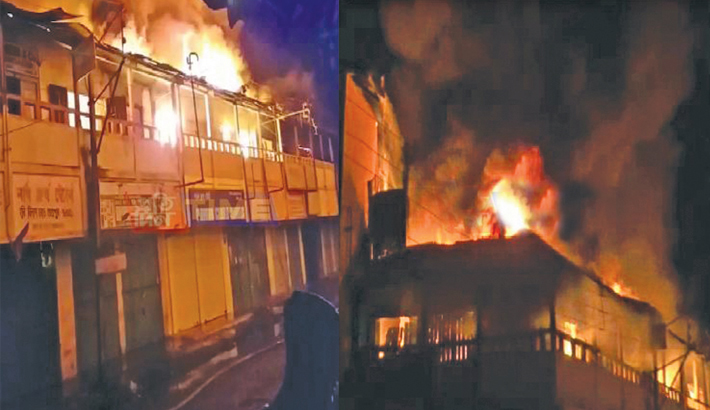 A new tragedy has engulfed Bangladesh once again. The casualties in Chawkbazaar fire have crossed 80. We sincerely hope that the number will remain stuck there. We pray for the salvation of the departed souls. Others, we hope, will make quick recoveries and come to full-throttle in their days to come. Will they be able to return to normalcy? They will need counselling sessions and community supports to get rid of this trauma. Do they have enough money for that? Hence, our private sectors, civil societies and non-government agencies should cater to traumatised people and give shelter less people some places to stay, at least ephemerally.

Could we have averted this tragedy? Have we learned any new lessons since the Nimtoli inferno? Has anything changed in the last nine years?

There are 98 per cent illegal warehouses in the country. Many of them are used for making counterfeit products like deodorants. After the Nimtoli tragedy, previous ministers pledged to general people that they would shift the warehouses to non-residential areas. But they have failed to keep their promises. We still have 15,000 chemical warehouses in residential buildings. Industries minister Nurul Majid Mahmud Humayun is self-contradictory in his statements, “This is a gas cylinder blast, LP gas, which was being delivered to meet the (utility) gas shortage in the area“. Every Tom, Dick and Harry seeing the blaze, could decipher that it was not a minor fire incident. The admixture of chemicals into the fires raged them into furies.  Humayun again retorted, “The chemical business in old Dhaka is a family business. It’s like a family tradition. They don’t want to go far. A lot of issues are related to this. I’m from old Dhaka. I know this very well”. Even Mahmud knows it well that the chemical substances led to widespread fires. He is going through the process of “Repressive De-sublimation”. Chemical substances carry more danger than gas cylinders. He tries to abate the potential risky nature of chemical substances by alluding to the presence of less dangerous LP gas. He attempts to reduce the risk-factors. The concerned ministers should tender resignations for failing to shoulder their responsibilities.  They should have made residential areas chemical-free zone. Even reporters present there, were discouraged by some gold-digging business people not to refer to the presence of chemical warehouses causing so many injuries in such a short span of time. Old towns have cheaper rents, which is why, many business people don’t want to shift to relatively expensive non-residential locations. They don’t want themselves to be rooted out.

The roads around old towns are zig-zagged and narrow. Fire workers found it really difficult to douse the flames. They had to fetch water from distant areas, some 800 yards away. We should laud the rescue workers for swiftly moving on to end the escalating danger which unfortunately killed many non-residential people too. People failed to find enough escape routes. Many bodies were charred. One death led to other deaths.  Reportedly, one owner, about a week ago before the disaster, was requested by concerned officials to change the location of his warehouses. We don’t know whether he would have changed his location or not. Before he made his decision, fire killed him and his family members. One man’s obdurate decision has killed many people! Hazaribagh Fire Station Officer Md Abdul Halim lamented, “If the blaze was not caused by chemicals, we would have brought it under control within the soonest possible time. The entire night we fought to bring the fire under control and in the morning we were finally able to do so.”

The news, rightly so, has garnered international attention. West Bengal Chief Minister Mamta Banerjee has already expressed her condolences. She wishes the survivors to make “a speedy recovery.” Raveesh Kumar, spokesperson, Minister of External Affairs, expressed India’s solidarity “as a close neighbour and partner” for “the Government of Bangladesh in this hour of grief.”

Prime Minister Sheikh Hasina has shown her leadership mettle once again. She expressed her utter shock and has instructed to provide adequate facilities with financial aids coming from her government’s fund. She has formed a 12 member committee to make an investigation into the matter. They should not dilly-dally. The probe committee should be neutral. They should make an impartial report concerning the welfare of the country. Based on their recommendation and the high-court verdict, we must ensure our security. At the same time, we should not discourage businessmen from earning their living. We must make them understand that they should not do any type of business that puts others’ lives at risk.

This is not the time to play political card-games. We should stop playing a blame game. This is a time for unity. BNP Secretary General, Mirza Fakhrul Islam Alamgir said, “The government has failed to deliver on all fronts. It’s utterly exposing its failure in protecting peoples’ lives. We’re seeing people are losing lives everywhere due to the government’s mismanagement and lack of responsibility”. Instead of blaming the state, his party should have donated money and other necessary facilities for the survivors. These disparaging remarks will take us nowhere. Let us settle our differences and mourn the incident both privately and publicly. Adversities can unite people in no such better time than this traumatic incident.