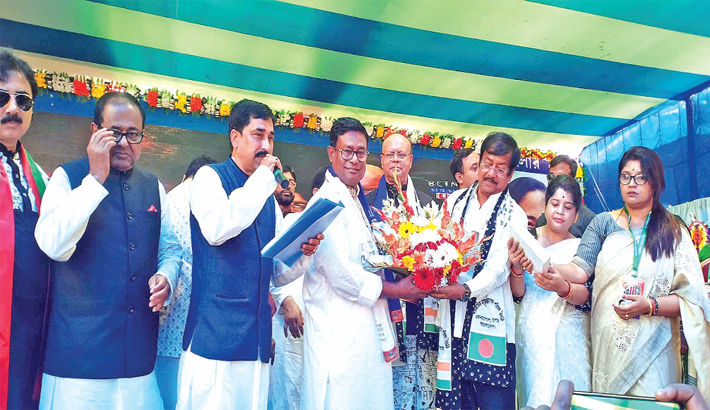 Thousands of people from two neighbouring countries, Bangladesh and India came into one platform showing deep affection for mother tongue on International Mother Language Day, at no-man's land between Benapole and Petrapole on Thursday, reports UNB.

Forgetting borders, defying the barbed wire people in groups joined the gathering carrying banners, festoons and placards to show respect for the mother tongue while no border security from Bangladesh or India prevented them from crossing the border either.

Singing “Amar Bhaiyer Raktey Rangano Ekushey February, Ami Ki Bhulitey Paari”, they paid rich tributes to the Language Movement martyrs by placing floral wreaths at a makeshift Shaheed Minar there. Border security forces of the two countries also greeted each other with flowers on the occasion.

Addressing the programme, Indian Minister Jyotipriya Mallick said “I have

come here to respond to the call of the mother tongue. I’m overwhelmed to see the friendly people of both the countries observing the day together.”

“We don’t want the border and fence, we want restriction-free communication between the two countries”, he said.

The no-man’s land was decorated with colorful festoon, banner, placard and flowers where people crossing the borders greeted each other with love and brotherhood.