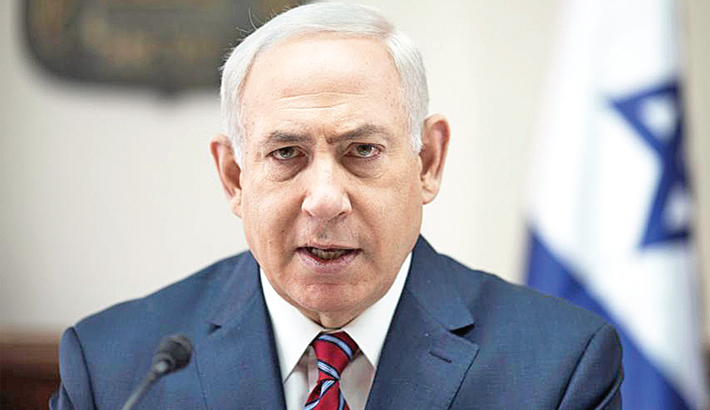 While polls have consistently shown Netanyahu is likely to win the April 9 election, the combined power of his two main challengers from the political centre will at minimum shake up the campaign.

An announcement by Israel’s attorney general ahead of polling day of charges against the prime ministers would greatly boost the new alliance’s cause, but it is unclear when a decision in the investigations will be unveiled.

Netanyahu has tacked further to the right as he faces the potential indictments and the challenge from the newly allied centrist politicians: Benny Gantz, a respected former armed forces chief of staff, and Yair Lapid.

He demonstrated that on Wednesday by brokering a deal which will raise the profile of an extreme-right party and potentially see it win seats in parliament, leading critics to say he was pandering to “racists”.

Gantz and Lapid have seized on such moves and the corruption investigations to promote their alliance as one that can restore Israel’s values.

They said they had agreed to unite “out of a sense of deep national responsibility.”

“The party will put forward a new leadership team which will guarantee the security of Israel and will reunite the divided elements of Israeli society,” Lapid’s statement said. Other members of the alliance include former defence minister Moshe Yaalon and another ex-military chief, Gabi Ashkenazi.

Gantz and Lapid plan to rotate as prime minister should they win the election.

Gantz would be premier for the first two-and-a-half years and Lapid, a former television journalist turned politician, would take over afterwards.

Netanyahu’s Likud party responded to the alliance by repeating the line of attack it has engaged in for weeks, seeking to label Gantz a “weak” leftist.

Israeli politics have moved firmly to the right in recent years, with much of the population having grown weary of calls for a two-state solution and unwilling to make signficant compromises in favour of the Palestinians.