‘I want a piece of my son’s flesh’ 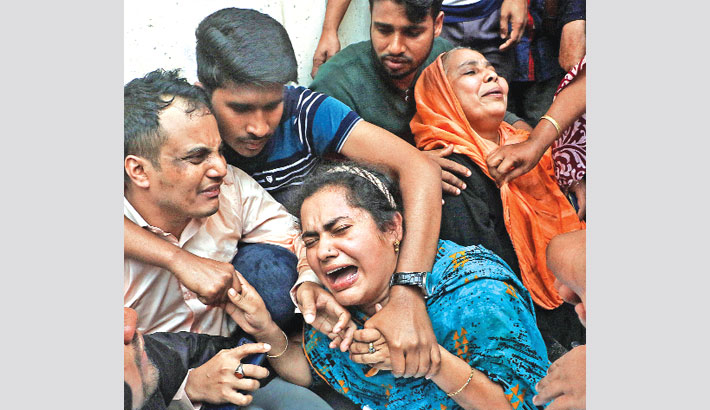 As the families of the victims gathered at the Dhaka Medical College Hospital and wailed, it unfurled the horror that hit old Dhaka killing 70 people and injuring 50 others in one of the worst fire accidents of the country.

The families — father, mother, wives, siblings or even children — converged at the hospital at dawn Thursday to look for their loved ones and hoping the ones they were looking for had not perished in the blaze. Every face told a story of being hit by a sudden horror and the anguish of finding their loved ones alive.

Some rushed to the hospital’s burn unit, while others to the morgue. But the reality added more horror as some found only charred bodies which were practically beyond recognition.

Incidentally the fire had also hit a far away village in Noakhali as most of the victims belonged to that part of the country.

Many showed photographs as they searched not sure whether to their loved ones were dead or being treated for injuries in the hospital. Police were in hand to help these unfortunate people.

At the precede of the day,  air of the hospital became heavy with screams of parents, wives, sisters, brothers and other near and dear ones of dead and injured.

Relatives and enthusiastic onlookers could not hold their tears seeing charred bodies turned or upto 80 percent burnt in a hospital bed.

“Please give me, whatever you find, even if it’s only a piece of flesh of my son,” wailed the mother of North South University student Ruhan Khan, who was not lucky to survive as flames engulfed several buildings housing apartments, shops, restaurants and warehouses.

“My son had a dream that he will go to abroad. Will he come to me if I call him,” Rubina Akthar mother of the BBA student.

Ruhan Khan was burnt alive on Thursday night in the fire at Nandakumar Dutta road in Dhaka’s Chawkbazar are. His family were frantically looking for his body.

Fourth semester student Ruhan along with his four friends, including Mahedi and  Labib, were driving through the Nandakumar Dutta street on motorbikes, according to his relatives. Labib survived and informed Ruhan’s family.

The motorbike Ruhan and Mahedi were driving flew into the air after the explosion of a gas cylinder in pick-up van, his cousin Mamun Ahmed confirmed

Mahedi’s was identified by his relatives, but till late afternoon on Thursday Ruhan remained missing.

Jorina Begum faints after losing two brothers and a nephew

A few yards away Jorina Begum was wailing and frequently losing her senses as she waited for the bodies of her two brothers Apu (30) and Mohammad Ali (32) as well as a three-year-old nephew, Arafat (3).

Owners of Apu Enterprise, they came out after ending day’s business when the fire started.  Little did he know that they were walking out of the shop to death. They stuck in a traffic jam.

Jorina kept on screaming “I have nothing left in this world.”

These two correspondents tried to help one of the victim’s the relative —- Ilias Hossain. He was looking for the body of his brother of Kawser at the Dhaka Medical College Hospital morgue. He was informed about the death of his brother who was a partner at Chakbazar’s ‘Madina Medical Hall clinic’.

Kawser’s wife, holding their twin babies, screamed at the loss which was a double accident. He could not get out of his shop as somebody had locked it from the outside.