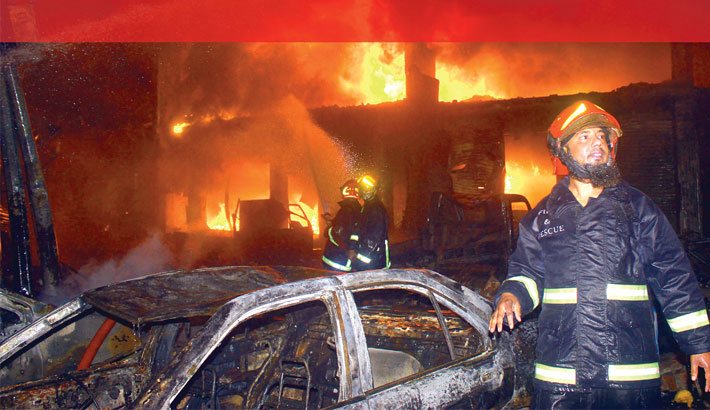 Firefighters trying to extinguish the blaze that broke out at a building at Chawkbazar in Old Dhaka Wednesday night.

A bizarre fire triggered by a series of incidents in the Dhaka’s historical old parts killed at least 78 people and injured at least 50, some of them critically, in the second such incident in the area since 2010.

The exact cause of the fire remained unclear, but most witness said they survived barely as the blaze rapidly engulfed one multi-storied building named Haji Manzil after the other as well on the street on Wednesday night.

The devastating fire broke out around 10.40pm at a multistoried building in Chawkbazar area, in the old part of Dhaka. The flame spread to at least six adjacent buildings rapidly. The flame was doused around midday on Thursday when helicopters came in aid of the fire fighters, but smoke still made the air heavy in a large part of old city with sudden sounds of perfume bottles exploding. The operation was wrapped up soon after midday Thursday, but some fire fighters remained.

Prime Minister Sheikh Hasina expressed her shock and sorrow at the tragedy, and would bear treatment cost of the victims.

“I heard a sound and looked back .... a truck hit the back of a parked car which set off the first blast when the gas tanker of the car blew up on impact,” he said, adding “then fire spread to closely parked several other vehicles and onto nearby shops and buildings in an unbelievable speed.”

Motiur Rahman, a local resident said, he was standing close to the scene and saw the explosion lift a car in the air.

There were few gas cylinders in front of the Rajmoni Hotel which caught fire after the transformer exploded, he said.

Witnesses said at an adjacent Katara  community centre a wedding party was underway and it was feared most of them were killed. Business leaders said 30 shops and 130 warehouses perished in the blaze, while the losses ran into several million Taka.

At least 40 businessmen, like other days, had gathered at  Hotel Razmoni for an end of the day tea and their fate was still unclear. Many walking past the buildings, which now looked like a black rubble in a war area, at that time were caught in the bizarre fire and some of them either died or injured.

A similar fire in 2010 in an old Dhaka building, which was also used as a chemical warehouse, killed more than 120 people in one of the worst fire tragedies in Dhaka.

Fire service and police put the death toll at 70 at noon Thursday, but warned the toll was likely to go up as there might be charred bodies in the burned out buildings as search for bodies continued. On the other hand doctors in the Dhaka Medical College Hospital’s Burn Unit told the Daily Sun that all those admitted had severe burn injuries and none was “out of danger.”

Burned patients develop complications even after several days of being injured and sometimes it became fatal, they said, adding manu suffered smoke inhlation damaging their system.

“Some of the bags contained only parts. Considering that, the total number of dead maybe 67,” said Prof Shohel Mahmood, head of Forensic Medicine at the hospital.

Nearly 40 units of the fire service armed over 200 fire fighters faced a gigantic task because the old part of Dhaka city is criss-crossed by narrow streets and old buildings hug each other. Fire Service officials said many of their emergency vehicles could not enter the spot through the narrow streets and had to fetch water from a distance.

Most of the residential flats have shops in the ground floor and police said despite warnings not to make warehouses of inflammable items, the residents ignore and sometimes secretly rent their spaces for such purposes, which led to this massive fire comprising of six.

Fire service chief Ali Ahmed said the fire might have originated from a gas cylinder before quickly spreading through the building where highly flammable chemicals like plastic granules, liquid chemicals and body spray were stored despite warnings not to do so.

Mohammed Salauddin, injured in the head and being treated at the Burn Unit,  said “There was a traffic jam when the fire broke out. So people could not escape. I was on a rickshaw when the explosion took place and something fell on us and I was injured ... but I am not sure if the rickshaw puller survived..”

The Katara Community Centre, which was at the south of the building where the fire initiated, was surrounded by a crowd and many vehicles, witnesses said.

Everyone began to run frantically after hearing the blast. Some of them died on the scene being burnt.

A fire official told reporters that the blaze has been “confined” but not yet doused despite the efforts of more than 200 firefighters.

Bangladesh has been harshly criticised for its poor safety record, with many buildings being used both for residential and commercial purposes.

Dozens of people were trapped in the buildings, unable to escape onto narrow streets clogged with traffic, as the highly-combustible stores of chemicals, body sprays and plastic granules erupted in flames.

A nearby community centre that had been hosting a bridal party was also caught in the blaze, trapping the entire group and injuring many.

The deputy commissioner of Dhaka metropolitan police, Ibrahim Khan, said at least two cars and 10 cycle rickshaws were burned in the fire.

“The victims included passersby, some people who were eating food at a restaurants and some members of the wedding party,” he said.

Burned-out, empty deodorant canisters which had been stored in a building littered the road and explosions from gas cylinders were heard almost throughout the night, witnesses said.

Dhaka city has been estimated to house around 1,000 chemical factories that have long been regarded as a ticking time bomb. Around 850 are illegal, according to the Poribesh Banchao Andolon, an enviromental group.

Dhaka South Mayor Syed Khokon told reporters at the scene of fire that he was pained, but more frustrated as the residents have repeatedly ignored warnings. “We have decided to give licences for such businesses only a few days ago,” he added.

Khokon said they would order shifting of any shops or warehouses keeping inflammable items immeditely.

A probe body has been set up tasked with specific recommendations to ensure that no such incident was repeated.