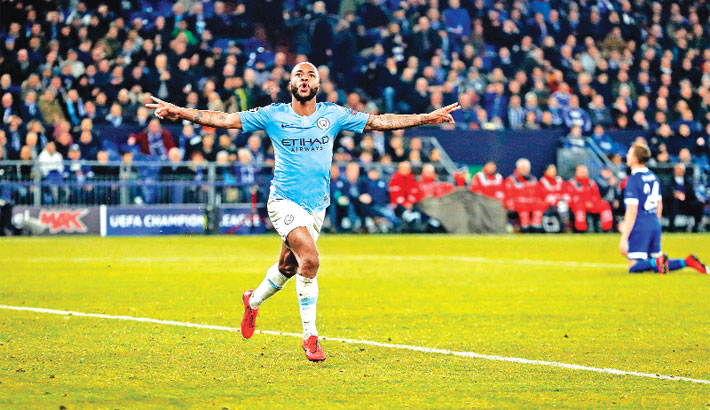 Sterling tucked away the winner at the Veltins Arena in the 90th minute just after substitute Leroy Sane fired home a stunning free-kick for the Premier League leaders against his former club in the last 16, first leg.

City were in real trouble with 22 minutes left when Nicolas Otamendi, who gave away the controversial first penalty, was sent off for a second yellow card before Sane's moment of brilliance and Sterling's winner.

However, City still have some work to do in the return leg on March 12 with Fernandinho, who was booked when conceding the second spot-kick, and Otamendi both suspended.

Schalke are just above the Bundesliga's relegation places and winless in their last four league games, yet they gave Premier League leaders City an almighty scare.

The hosts initially struggled to get out of their half as Man City dominated the opening 30 minutes, until the game swung dramatically Schalke's way with the two penalty decisions.

Schalke shot themselves in the foot for City's opening goal on 18 minutes when a lazy pass from goalkeeper Ralf Faehrmann to Salif Sane was snapped up by David Silva.

The Spaniard drew Faehrmann and selflessly served up a simple tap-in for Aguero to claim his 10th goal in his last seven City appearances.

However, falling behind sparked life into Schalke. Striker Mark Uth fired wide, then ex-Tottenham Hotspur midfielder Bentaleb got the better of Ilkay Gundogan in midfield.

Schalke drew level after Daniel Caligiuri fired in a speculative shot which clipped Otamendi's arm. Despite City's furious protests, VAR awarded a spot-kick, which Bentaleb tucked away to the delight of the home crowd on 38 minutes and they would be celebrating again soon after.