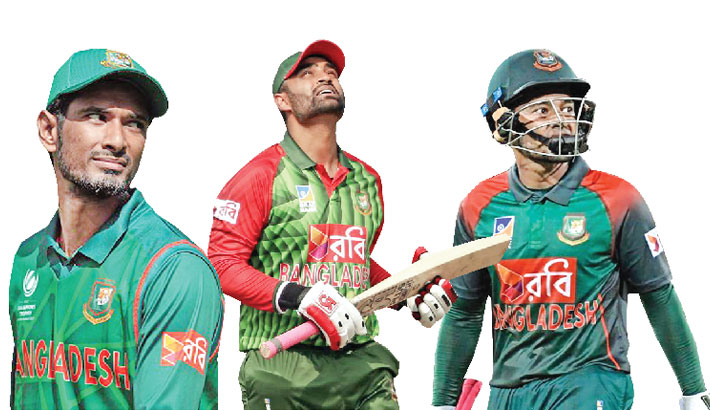 Bangladesh suffered another humiliation in New Zealand as the host cleanly swept away the visitors in the three-match ODI series on the back of continued failure from Tigers’ three experienced campaigner namely Tamim Iqbal, Mushfiqur Rahim, Mahmudullah Riyad.

The onus was on the trio to play their part and give Tigers a major boost ahead of the upcoming Test series against the Kiwis and also the World Cup in May as Test and T20 skipper Shakib Al Hasan was not part of the ODI squad due to an injury he sustained during the Bangladesh Premier League (BPL) finals.

However, it was another top-order batting debacle as familiar patterns resurfaced. Tigers’ batting woes continued which seemed to have helped the hosts keep their hundred percent winning record intact at home against Tigers.

Tigers have historically suffered in seaming conditions as they failed to properly plan on how to face pace and bounce while their misery only doubled as Kiwi seamers extracted the zip and the movement to make sure Tigers are playing outside their comfort zone.

Tigers defeated West Indies at their own den in both ODIs and Tests before boarding for New Zealand and Tamim Iqbal played a major role behind their success against Windies during that series.

Tamim played the anchoring role to perfection as he hit two tons in the three-match ODI series against Windies which helped the hosts go about their business with some sort of clarity as others built their innings around the left-handed opener. Courtesy of Tamim, Tigers got to competitive scores on the back of late onslaughts from Mushfiqur and Mahmudullah.

Coming off the back of a blistering ton in the BPL final it was expected that Tamim would lead the way against Kiwis but it seemed his approach was vastly different in this series as not only did he look like he was altogether playing a different role he also appeared to have jumbled up his game plan priorities.

In the first ODI, he was dismissed after he was unable to contend with the late movement of a terrific Trent Boult delivery, his head falling over slightly outside the line of the delivery as the ball took the edge of his bat. By the time he had gone through his shot, the angle of his bat was facing mid-on.

The front foot came in too early and it became difficult after that as the ball jagged back into the left-handed Tamim Iqbal. The second ODI also saw Tamim suffer the same issue as he went onto the front foot a bit early. It became evident that in seaming conditions it is perhaps better to watch the ball closely before planting the front foot.

Mushfiqur, usually the most technically able of the Tigers’ batsmen managed an inside edge off Trent Boult in the first ODI.

Bugged by injuries ahead of the ODI series, he twice dragged deliveries from outside his off-stump and it appeared his batting was not as fluent as it is the case usually. It became more evident as Boult troubled him regularly during his stay in the middle during the first ODI.

Boult, decided to bowl from wide of the crease with an intention to have the ball leave the batsman, Mushfiqur seemed to be short of options against the left-arm pacer’s game plan.

Mushfiqur, who took guard on his leg stump tried to shuffle across too often and perished on both the ODIs while playing loose shots away from his body to deliveries too close to his off stump while staying deep inside his crease.

Mahmudullah too played away from the body as he was late to judge the pace and length of Lockie Ferguson in the first ODI which eventually brought his downfall after opting to slash at the ball on the up. Neither did he have enough width to play that shot nor was the length was perfect to go after that shot that early in the innings.

Mahmudullah is known to be a slow starter and usually goes into his groove by passing time in the middle but in both the ODIs he failed to apply himself to bring out his best.

There was no question over his intent suggesting that he wanted to dominate the bowlers but the feet remained far away from the line of the delivery as he paid the price.

In the third ODI it was all the same for the trio and it appeared that they failed to learn from their mistakes and take initiative of making the mental adjustment that was required at that part of the region.

All three of Bangladesh’s top-order batsmen had acted on their positive intent but the shot selection was poor because of their own game plans. It was about adjusting one’s technical strength to the conditions in play.

Bangladesh hadn’t had that luxury like the above mentioned cricket giants but even though they came here with a hope of winning some matches but the reality however gave them a harsh experience.

In the ongoing tour, they also got a wicket to their likings at least in the first ODI but suffered a humiliating eight-wicket defeat and it seemed they failed to pick the momentum early like the way they do on most occasions during the success they had in ODI’s and followed the second and third ODI’s by earning eight wicket loss and 88-run defeat respectively