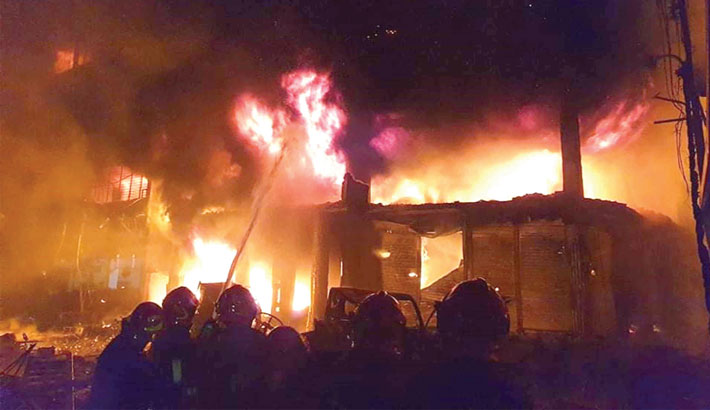 Firefighters spray water to douse a fire that broke out at a building at Chowkbazar in the old part of Dhaka on Wednesday night. – SUN PHOTO

A devastating fire broke out at a building in Old Dhaka’s Chawkbazar, leaving scores of people injured.

The four-storey building behind the Shahi Mosque at Churihatta caught fire around 10:40pm on Wednesday, witnesses said.

Twelve of them were burnt while the others sustained other forms of injury including cuts from broken glasses.

Some broke their bones after jumping off the building, according to Bachchu.

Firefighters were trying to douse the flames till filing the report at 1:30am.

Residents of the neighbourhood said an electric transformer next to the building exploded after the fire had started.

The ground floor of the building housed some shops and the first floor was being used as a warehouse while some families lived on the other floors, a resident of the area said.