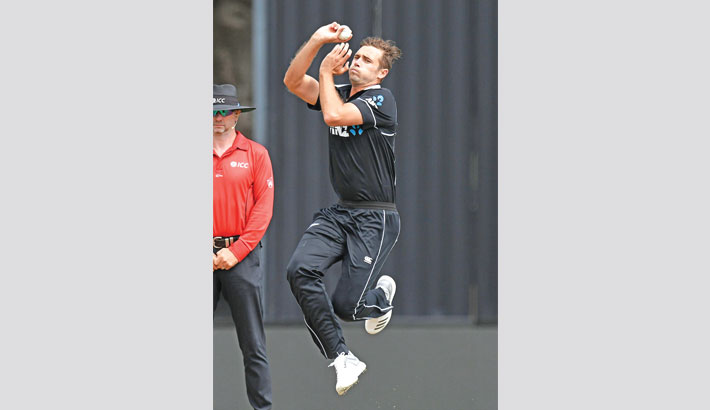 Sabbir Rahman’s maiden ODI century went in vain as New Zealand beat Bangladesh by 88 runs to secure a 3-0 series whitewash in the final ODI at University Oval in Dunedin on Wednesday.

Despite Sabbir Rahman’s battling century the tourists fell well short of the 331-run target set by the Kiwis as the visitors top-order continued their struggle in the series so far and it seemed as if Tigers gave up the chase midway into the innings when they lost their fifth wicket, Mahmudullah Riyad, when the team total stood at 61 runs in 15 overs.

Tim Southee was the wrecker in chief with his standout bowling, taking 6 wickets for 65 runs to help the hosts extend their unbeaten record across all formats at Dunedin Oval which also prevented their opponents to taste their maiden victory in this antipodean nation.

Bangladesh had the worst possible start to their innings as they were reduced to 2 wickets for 3 runs before Mushfiqur Rahim and Mahmudullah resisted further calamites for a brief period though both failed to come up with any kind of act of rescue.

Sabbir along with Mohammad Saifuddin (44) added 101 runs for the sixth wicket-stand to provide necessary support. They took the score to some sort of respectability before Trent Boult broke the partnership by removing the latter.

Sabbir scored 102 runs from 110 balls with 12 fours and 2 sixes to reply his critics as well as repay the faith of national skipper Mashrafe Mortaza for keeping trust on his ability to such an extent which forced BCB to reduce his ban.

Put into bat, New Zealand didn’t get off to a power-start as well as they had been accustomed to so far in the series. Colin Munro wasted yet another opportunity to make his case in a regular eleven as he was trapped leg-before in the fifth over of the innings by Mashrafe Mortaza, whose delivery darted back of the seam to catch the southpaw plumb in front.

Martin Guptill, meanwhile, had started well, continuing the form that had helped him bag player of the match awards in the first two games of the series. However, six dot deliveries out of eight by Mortaza and Mohammad Saifuddin had slowed down Guptill’s onslaught for a brief while. However, the frustration got to him too early as he desperately tried to hit the latter out of the ground, only to have himself caught by a superb effort from Tamim Iqbal in the deep.

There was everything that batsmen would’ve wanted early on in the pitch - short boundaries, an easy-paced wicket and a less-than threatening new ball attack. And yet, with the hosts reduced to 56 runs for 2 wickets, Henry Nicholls and Ross Taylor curbed the temptation to hit the big shots.

They worked the ball around, plucked singles and twos, and at times, found gaps to score boundaries. There was negligible effort to hit over the in-field or counter aggressively. It made for poor entertainment but as the alliance grew over 50 runs, it was proving to be mighty effective.

It was only after Nicholls brought up his eighth ODI fifty that the duo decided to shift a gear higher. In a brief period of play, between overs 25 to 28, they stroked 5 boundaries. It also included a cut from Taylor past point which helped him reach 43 runs and become the second New Zealander to register 8000 ODI runs.

Bangladeshi batsmen failed to learn the lesson from their counterpart on how to go about their batting in the middle in a relatively easy batting wicket. New Zealand acting skipper Tom Latham said that he is proud with the achievement as they displayed clinical precision.

“Probably couldn’t have asked for anything better. We managed to have a few partnerships in the middle. We had a bit of fun towards the end. We’ve got a good squad of players and to see Tim come back and bowl at a good pace and swing the ball was very refreshing,” said Latham.

“We are doing alright in all departments and the challenge for us is to keep getting better. Each time the bowlers take wickets upfront it also challenges us to pick up wickets in the middle period of the game. We are always trying to learn and this series is no different,” concluded Latham.