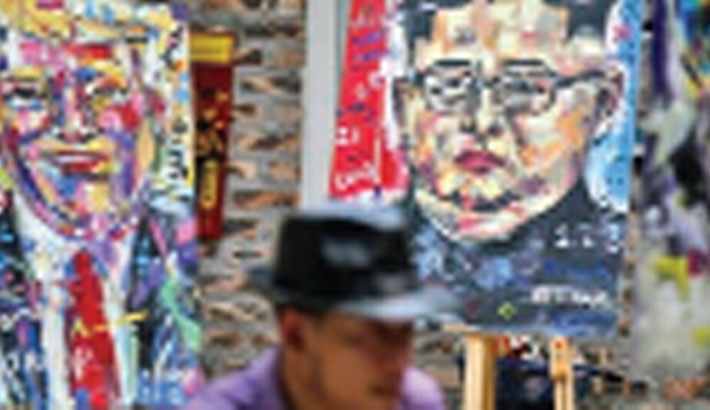 HANOI: Vietnam artist Tran Lam Binh brushes hearts and the word “L-O-V-E” on his portrait of US President Donald Trump and North Korean leader Kim Jong Un, part of his peace paintings series ahead of the leaders’ summit in Hanoi next week, reports AFP.

He hopes to present his artworks of the leaders—bursting in bright pinks, oranges, greens and crimsons—when they meet on February 27-28 for a landmark second summit aimed at dismantling Pyongyang’s nuclear programme.

His colour palette may not be true to life, but Trump’s trademark blond locks and Kim’s full cheeks in the 10 or so paintings he has created so far are unmistakable.

“I really want the two leaders, or just one of them, to come and see my works here... I dream of giving one of the portraits to them,” Binh told AFP from a Hanoi cafe where he has been working on the series.

The self-proclaimed Trump obsessive started painting the American president after the election, and has about 50 portraits of him in his studio—some that he displayed in the US capital on the pavements outside the White House in 2016. “When I paint him, I feel like I understand his inner feelings through his eyes, his face,” the 36-year-old artist said, standing next to several easels displaying his technicolour works.

He has even sculpted a nearly two-metre (six-foot) statue of the brash US leader, and while Binh’s admiration for the reclusive Kim who has overseen North Korea’s nuclear ambitions has been slower to emerge, he has grown fond of him.