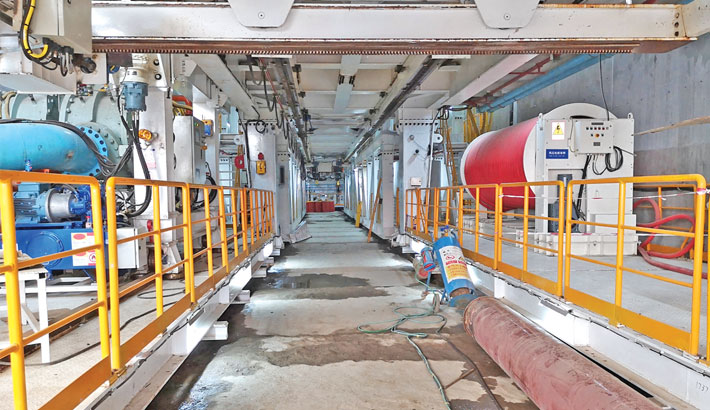 CHATTOGRAM: Boring work of Bangabandhu Sheikh Mujibur Rahman Tunnel being constructed under the Karnaphuli River in the port city will start on Sunday.

All necessary preparations have been taken to start the work by using sophisticated tunnel boring machine (TBM) imported from China, sources concerned said.

Some 32 percent work of the project has already been completed, he said expressing the hope that the tunnel will be open to traffic by the end of 2022.

Bangladesh Bridge Authority took the initiative for constructing the tunnel with an aim to connect the southern part of the port city with Anwara upazila on other bank of the river.

The project objectives also include improvement of road communication in the country’s south-eastern region, getting the country connected with Asian highway network, planned urbanisation on the both banks of the Karnaphuli and enhancing facilities for the Cthttagong seaport.

China Communications Construction Company Ltd is implementing the project to construct the dream 9.39 kilometre tunnel with two tubes for traffic.

Of the total length, the main tunnel will be 3.4 km long, the approach roads in the east and west ends stretche 5.35 km and an overbridge (viaduct) 727 metres.

Though the project cost was initially estimated at around Tk 8,446 crore, it was later increased to around Tk 9,880 crore for different reasons, including hike in exchange rate of dollar, sources said.

Of the total cost, Bangladesh government will provide around Tk 3,967 crore and some Tk 5,913 crore will be funded by the China government.

Of 381.6031 acres of land for the project, 294.0994 acres have been handed over to the Chinese contractor firm. Process for handing over the rest 87.5037 acres to the Bridge Authority is underway.

Officials concerned said some 1,200 people, including 500 Chinese engineers and workers, are involved with the project work on both sides of the river.

Loan agreement with China’s Exim Bank came into effect on November 6 in 2017 and mobilization payment was given to the contractor firm on December 5 of the same year.

Sources said the tunnel will connect the Naval avenue point of the port city with the CUFL point under Anwara upazila in the district.

The under-construction of 17Km long and 90-foot wide four-lane outer ring road on the existing coastal embankment stretching from Patenga to Faujdarhat areas will connect the tunnel at Patenga.

Work on the project is going on in full swing and the road will work as an approach road to the tunnel on the west bank.

Contacted, Chittagong Chamber of Commerce and Industry (CCCI) President Mahbubul Alam told the daily sun that after implementation of the project, ‘One City and Two Town’ will be developed which will create new avenues of economic activities in Chattogram and Cox’s Bazar districts.

The under-construction projects including tourism industry, industrial parks, special economic zones, deep seaport, power plants and LNG terminal in Chattogram and Cox’s Bazar will benefit from the tunnel, he said.

The tunnel will also ease gridlock in the port city as goods-laden and passenger vehicles will ply to and from Chattogram, Cox’s Bazar and other parts of the country bypassing the city, the CCCI president added.

“The tunnel will unlock huge potentials and businesses will get a quick boost thanks to it.”

While visiting the project site, this correspondent saw massive work going on from Patenga sea beach point to the bank of the Karnaphuli in Naval Academy Point.

Construction work on the mega tunnel project began on December 5 in 2017.