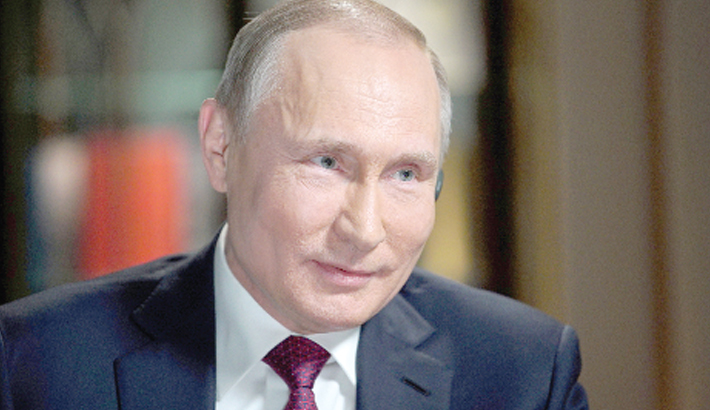 But while he took a combative tone with the West, he reached out to Russians with promises of improved living conditions. The longtime Russian leader warned Washington against deploying any new missiles in Europe following the collapse of a key Cold War-era treaty, saying Moscow would consider it a “serious threat”.

“I’m saying this clearly and openly, Russia will be forced to deploy weapons that can be used... against the decision-making centres that are behind the missile systems which threaten us,” Putin said.

The United States and Russia raised fears of a new arms race when they announced earlier this year they were pulling out of the Intermediate-Range Nuclear Forces (INF) treaty, a 1987 deal that limited medium-range missiles. Washington was the first to announce its withdrawal, accusing Moscow of developing new weapons that violated the treaty, but Putin on Wednesday dismissed the US claims as “far-fetched”. The tough talk on missiles seemed aimed at stirring up patriotic support for Putin, who won re-election last year with more than 76 percent of the vote but has been recently struggling with dropping poll numbers.

A survey by Russia’s independent Levada Center released in January found his approval rating at 64 percent—a figure many Western leaders could only dream of, but Putin’s lowest in five years.

Most of Wednesday’s speech focused on promises to address poor living standards, a key source of frustration for many Russians nearly 20 years after Putin came to power. “We cannot wait, the situation must change for the better now,” Putin told assembled lawmakers from Russia’s lower house State Duma and upper house Federation Council.

“Within this year (Russians) should feel changes,” he said. Putin lamented that some 19 million Russians were living below the poverty line, saying: “This is too much... the state should help.”

Putin focused in particular on help for Russian families, pointing to a demographic crisis that has seen birth rates fall drastically since the 1991 collapse of the Soviet Union.

Last year the government’s statistics agency said the country’s birth rate had fallen by 11 percent in 2017 to the lowest level in a decade. “The incomes of Russian families should of course rise,” he said, promising new child benefits and lower taxes for larger families.

Putin, 66, appeared calm and confident as usual during the speech, but the Kremlin is reportedly deeply concerned by the fall in his personal approval ratings in recent months. Russians appear increasingly frustrated with the slow pace of economic growth and the concentration of the country’s wealth in a few hands in Moscow.

Moves by the government to implement economic reforms, including an increase in the retirement age and a rise in the value-added tax from January 1, have prompted widespread opposition including rare street protests.

Another Levada poll in October found only 40 percent of Russians would vote for Putin if an election were held.

Putin touched on several other issues of national concern during his 90-minute speech, including a waste-management crisis that has seen Russians outside Moscow protesting at plans to send the capital’s rubbish to provincial landfills.

“We must form a civilised and safe waste-management system,” Putin said, promising efforts to close dumps and boost recycling, which is nearly non-existent in Russia.