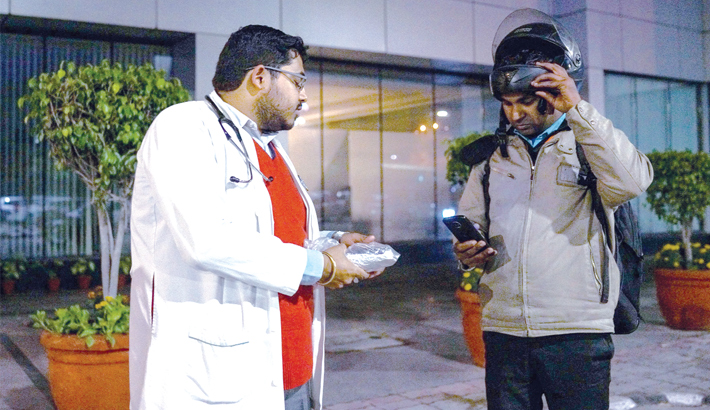 In this photograph taken on February 6, 2019, Indian delivery man Arjun Kumar Mehto (R) working with the food delivery app FoodPanda delivers food to hospital worker Ansuman Kar (L) in New Delhi. A surge in the popularity of food-ordering apps like Uber Eats, Swiggy and Zomato provides a welcome source of income for many as India's unemployment rate sits reportedly at a staggering 45-year high.

MUMBAI: Suraj Nachre works long hours and regularly misses meals but he treasures his job as a driver for a food delivery startup — working in a booming industry that highlights India’s expanding apps-based gig-economy.

The 26-year-old is one of hundreds of thousands of young Indians who, armed with their smartphones and motorcycles, courier dinners to offices and homes ordered at the swipe of a finger, reports AFP.

A surge in the popularity of food-ordering apps like Uber Eats and Swiggy provides a welcome source of income for many as India’s unemployment rate sits at a reported 45-year high.

But they also shine a spotlight on the prevalence of short-term contracts in the economy, raising questions about workers’ rights and conditions and the long-term viability of the jobs.

“(These delivery workers) are treated as independent contractors so labour laws governing employees are not applicable and they lack job security,” Gautam Ghosh, a human resources consultant, told AFP.

“While jobs created by food delivery apps are crucial, they may not exist in 10 years so for the majority of youngsters they are a stopgap arrangement,” he added.

India’s army of food delivery drivers, mostly men but some women too, became a talking point on social media late last year when a rider for the Zomato platform was filmed sampling a customer’s order.