Cwasa to set up another 60-MLD water treatment plant 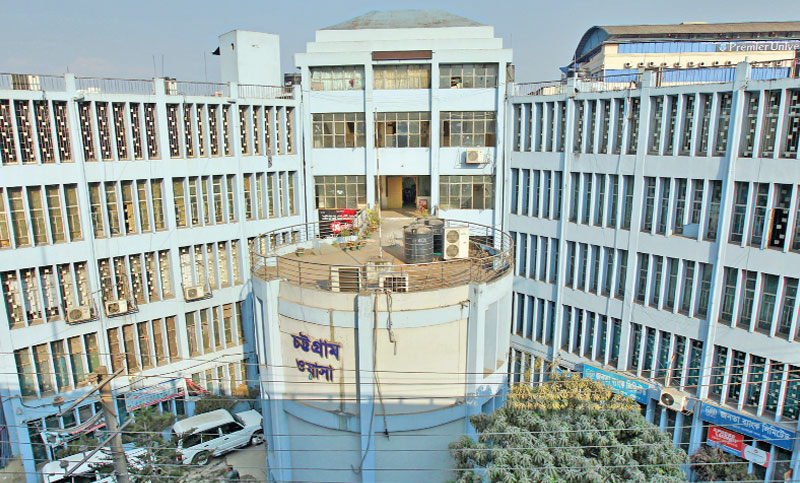 The front side view of the Chattogram Water Supply and Sewerage Authority (Cwasa) Building. — sun photo

Chattogram Water Supply and Sewerage Authority (Cwasa) is going to set up a water treatment plant having production capacity of 60 million litres per day (MLD) to ease water crisis of its residential and industrial subscribers.

Sources in the Cwasa engineering department said they prepared a Development Project Proforma (DPP) to develop the plant titled ‘Bhandaljury Water Supply Project’ in Joithapura area on the south bank of the river Karnaphuli under Boalkhali upazila in the district.

The project aimed at increasing supply capacity of drinking water for residents of the south bank of the river and upgrading standard of life in the port city.

Besides, another goal of the project is to play imperative role in industrial expansion on the river bank, said the sources.

A contact between Bangladesh government and South Korea was inked for developing the plant on November 26 in 2014.

The Executive Committee of the National Economic Council (ECNEC) headed by Prime Minister Sheikh Hasina approved the project involving around Tk 1,036.30 crore on January 5 in 2016.

Under the project, different development works including constructions of 60-MLD water treatment plant, underground and surface water reservoirs with capacities of containing 10,000 and 3,000 cubic metre water in Anwara and Patiya upazilas will be carried out.

Besides, 51.50 kilometre (km) transmission and 81.80 km distribution pipelines, and an 838-metre semi-shield through beneath the river will be set up under the project.

Sources said some 41.26 acres of land were acquired for development of the plant and compensation for the lands was handed over to the district administration.

Processes for acquiring some 4.97 and 2.94 acres of land for setting up the underground and surface water reservoirs are going on, they said.

Mentionable, Cwasa is now supplying around 350 MLD water to the city dwellers against the total demand of over 500 MLD.

The total production of Cwasa will stand at 640 MLD to help ensure 24-hour supply of water in the city by 2021 and meet demand for water in the city and adjoining areas till 2040 after successful implementation of the four ongoing mega projects including this one.

Contacted, the Project Director (PD) Muhammad Mahbubul Alam told the daily sun that they will be able to launch development works of the project by June this year.

He, however, also said that though there is a schedule to complete the works by September next year, it will not be possible as the tender process is yet to be completed.

The PD informed that they will complete the works of the project in three phases.

Of them, development works of the treatment plant will be carried out in the first phase, setting of the transmission and distribution pipelines in the second phase and construction of the water reservoirs in the third phase, he said.

The deadline to complete the works will have to be extended along with increasing budget for the project, said the PD.

He hoped that the project will play imperative role in industrial expansion on the banks of the river.

Mentionable, a good number of initiatives were taken to increase water supply in Chattogram keeping pace with the increasing demand for water over the last few years.

Of them, CWASA set up a water treatment plant having capacity of 140 MLD in Pomra area under Rangunia upazila in 2017.

The plant ‘Sheikh Hasina Water Treatment Plant’ was set up under the Karnaphuli Water Supply Project (KWSP), Phase-1 with the financial assistance from the Japan International Cooperation Agency (JICA).

The plant now meets 70 per cent demand of water in the city.