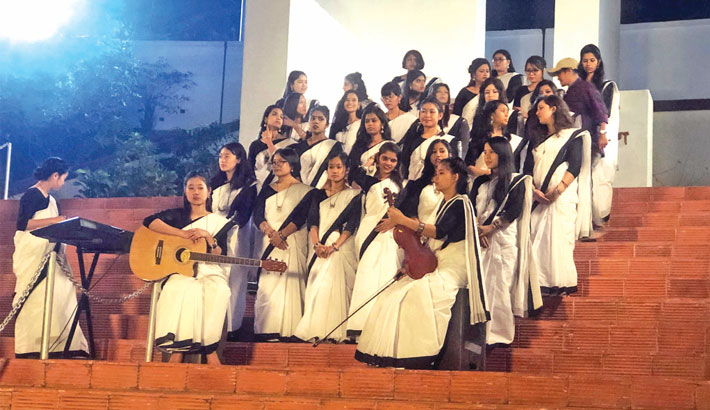 On the occasion of International Mother Language day – 21st February, Grameenphone has organised a choir to sing the song “Amar Bhai er Rokte Rangano Ekushe February” to honour the martyrs of the Language Movement.

Students from different language backgrounds of Asian University of Women, Chattogram, will sing the iconic song in the same tune as its original version.

The choir will be led by eminent singer and Bangladeshi choir specialist – Armeen Musa. This is the first time that the iconic song is going to be sung by a choir.  Armeen said she is very proud of being a part of such a noble initiative.

Meanwhile, Shaon Mahmud (daughter of Altaf Mahmud, the song’s original composer) was present during the arrangement. Her presence was what made the gathering a truly memorable one. After hearing about the choir-based rendition of the song, she immediately left for Chattogram from Dhaka.

Shaon said “I would like to thank the organisers as the song of our mother language being sung by women is a great attempt to spread the message of Bangla (Language Movement) across the world. I also believe that by asking me to join them, they have honoured my father, the song’s original composer”.

Students of Asian University of Women along with the organisers will record and film the song on the day. Students from more than 16 countries having different languages are studying at the university. Grameenphone believes that the students’ combined voices will collectively shed a whole new light on the iconic song.